US Interference In Russian Internal Politics, or How to Make Enemies

The US Emperor, in his trip to Russia, has continued a not so fine tradition of the US, reaching into a foreign nation's internal politics and trying to jiggle the levers. Unfortunately for the US, Russia is not Iraq or Serbia and this is not Yeltsin's era. The US has actively, in just the past 18 post cold war years, intervened in the internal politics, with crass actions of: Serbia, Croatia, Bosnia, Macedonia, Greece, Israel, Lebanon, Iraq, Iran, Pakistan, India, Ukraine, Georgia, Kazakhstan, Albania, Armenia, Uzbekistan, and at least half a dozen other nations I can not think of at the moment. Even now, the crass hand of the bankrupt, corrupt and inept Empire stretches down into peaceful Hondurans to force a despot and puppet upon them too. 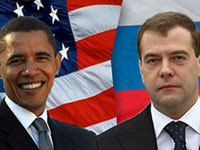 US Interference In Russian Internal Politics, or How to Make Enemies

Obama's relationship with President Medvedev and Prime Minister Putin, has been rocky at best. Obama first made an arse of himself with crass comments that Medvedev was selected by Putin, never mind a fair election where turn out was triple the typical American Imperial farce and where the vast majority, with international observers present, voted for Medvedev.

Obama's second dance on his tongue, was castigating President Medvedev for back handing the American Imperial vassal and petty mass murderer Saakashvili, a vampire who has fed not only on hundreds of millions of dollars of American serf's sweat but also on the blood of Ossessian women and children and now feeds on the blood of his own protesting people.

But none of this got in the way of the US Emperor as he prepared to go to Russia, which for some strange reason, he considers one of his vassals. In an opening salvo, aimed to "reset" the stage, Obama stated that he believed in Medvedev and looked at Putin as a man with one foot in the past, a Cold War warrior who was out of touch with reality. What was Emperor Obama and his West Africa Queen trying to reset? The Cold War? Well, you are well on your way.

Obama further tried to divide the Russian body politic by giving all his attention to President Medvedev while snubbing Prime Minister Putin, refusing his invitation to dinner, a major no-no in Russian culture, and spending the night instead in a glitz club for the criminally oligarchical and their whores.

The problem for the American Emperor and his handlers is that it is they who are in limbo of the Cold War, or rather the post Cold War 1990s, where the US opinion was actually taken seriously in internal Russian politics. What they can not seemingly understand is: Medvedev and Putin are a team who put together the plan and implemented together the plan and continue to do so with the plan...the plan that set Russian back on her feet and is now shaking off the last of the Western imperialistic chains. Through these ham fisted, crude and unimaginative tactics, regardless of how the peacocks who think them up and implement them may strut around afterward, the Russian power elite and the Russian public, can once more see that yet with another American president (term limited Emperor) nothing has changed, nothing. It is still business as usual: sow chaos, anarchy and misery in Russia. Work to break her up, to drain her, to destroy her culture, her religion in Christ and her soul.

But than again, this has been the action plan of DC ever since we made the mistake in 1861 was siding with them and not Richmond. It has been the plan of London even longer.

To the average Russian, this is nothing more than another reason to rally around the flag and look down upon the washed out Liberals with the same old shock therapy, spread misery, Wall Street economics and or the Other Russia, American pay rolled goons, crooks and Nazis.

A better boost to Russian nationalism, than the latest American Caesar, was hard to find. Crude behavior was just a big plus.