There’s one in every family, and in Washington’s political framework, there’s Joe Biden, one whose pig-headedness, sheer unadulterated brashness, arrogance, rudeness and chauvinism will ruin carefully planned approaches to policy building. After cavorting with the Devil in Ukraine and Georgia, he now comes back home and makes absurd and insolent remarks about Russian policy. 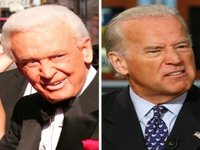 It has been quite apparent for some time now that there are two US Administrations, the good cop Obama who is genuinely well-meaning and liked, prepared to listen and build bridges, and the bad cop personified by Biden and Clinton representing the AIPAC/Washington regime axis which could basically not care less about the international community and whose policy focuses on Israel, NATO and the unelected lobbies which really pull the $tring$ in US policy.

After President Obama’s remarkable visit to Russia in which a new page in bilateral relations appeared to have been turned (after nearly a decade of the murderous Bush regime with its illegal wars, acts of slaughter, torture, derision of international treaties, wantonly destroying civilian structures with military hardware before doling out rebuilding contracts to White House cronies without tender), just a few days afterwards, Joe Biden spoils it all with a shocking display of insolence and ignorance.

In his interview to the Wall Street Journal (it is not clear whether it was made before or after lunch) references were made to Russia’s banking system which he claimed would not last 15 years, complete with an intrusive reference to Chechen “separatists” and Russia’s falling population. In short, according to the Vice President, Russia is in such a state that the USA does not need to do deals to reach compromises.

Shut it, Joe! For a start, for “separatists”, read “terrorists” and if Joseph Biden supports Chechen terrorists it speaks volumes about his integrity as a politician, as a man and his competence as a member of the White House team. 95% of the Chechen people voted to remain inside Russian Federation in a free and fair democratic election. His “separatists” are criminals who control the drugs trafficking, human trafficking and arms trafficking trades and always have done. The Vice President of the United States of America is therefore pig-ignorant. One would have thought that after 9/11 an American citizen would abhor violence. Not Joe Biden apparently.

Shut it, Joe! For your information, the Russian population has started to grow again. If the US Vice President bothered to look at the statistics, instead of mouthing off in a style more befitting a beerhouse brawl, he would see that the Russian birthrate rose by four per cent in the first half of 2009. The Vice President of the United States therefore has not a clue what he is talking about.

Shut it, Joe! Russia’s financial system is far healthier than he thinks and after the collapse of the market orientated economy in recent times, how can an American make any serious claim to have any credibility whatsoever?

Finally, after cavorting with the Devil, shaking the hand of that tie-chewing mass murdering wannabe Hitler in Tblisi, the man whose troops slaughtered nearly 2,000 Russian civilians last August in an unprovoked act of butchery unseen since his darling Chechen “separatists” at Beslan, and calling him a friend…it is clear not only who, as a man, but what as a political animal, this Joseph Biden really is.

He is the regime, the Dick Shotgun Cheney, the Donald Waterboarding Rumsfeld, the Condy Torture Chamber Rice, the George Ace of Spades Bush of the Obama regime. Any overtures President Obama makes, this Joseph Biden and his mouth is bound to ruin. He is the counterweight which will render the Obama Presidency redundant and which will ensure that Washington distances itself ever further from the hearts and minds of the international community.

Joseph Loudmouth Biden has done more damage in a single interview, sending out a clear signal as to what really lurks in the shadows and lunges behind the eyes of the Obama Presidency, than any other member of Obama’s team. In short, his presence clouds the skies above the White House, sending out a chilling message that what everyone most abhors about the United States of America is alive and kicking.

So a word of advice for “Joe”. Shut it! Next time talk through your mouth.