Barack Obama and the Banality of Evil 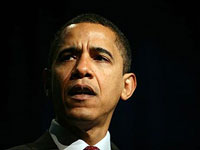 Barack Obama and the Banality of Evil

The Holy Bible tells us: “Blessed are the peacemakers, for they shall be called sons of God.”
-Barack H. Obama

When Hannah Arendt went to Jerusalem to observe the hideous monster (Adolf Eichmann) who had implemented Hitler’s abominable final solution, she was stricken by how normal, commonplace, and unfanatical this appendage of the Nazi machinery of death appeared to her to be. Similarly, in all likelihood, if an Afghani or Palestinian child whose home had just been bombed into an oblivion by a U.S. warplane or weapon of mass destruction, ever could catch a glimpse of the string puller behind such a heinous act of seemingly mindless and cold-hearted annihilation (and, of course, often times similar acts occur causing the mass murder, of innumerable innocent civilians, not only the destruction of inanimate objects and personal possessions), that child would be struck by a not completely unalike reaction.

The man at the head of the callous, and inhuman U.S. military colossus is a thin man, in a Hartmax suit, and a flag lapel pin, who speaks of (and in) grandiose concepts, and carries himself with a down to earth, empathetic, and unassuming style. One might think that Obama and the Nazi functionary of death, Eichmann, have little to nothing in common whatsoever; because Eichmann was simply trying to advance his career path within the limited confines of a rigid bureaucracy (uncritically following orders to make it to the next rank), and Obama is at the head of his nation’s vast military machinery (he is the one who is sending out the directives); but not dissimilarly Obama seems to be following the dictates of the bipartisan U.S. corporatist consensus, the war machine, and the military-industrial complex.

Both Eichmann and Obama do not sufficiently take into account the moral, and ethical consequences of their numerous wholly condemnable actions. Just because Obama is not a lackey for U.S. militarism and empire continuation (at least in the sense that he is being compelled to make his decisions by another), does not mean that he is not culpable for the immoral acts that he pursues in the name of global hegemony, and U.S. imperial adventurism.

Obama had an opportunity to bring change to Washington, but he eschewed this campaign promise in order to curry favor with ‘defense’ contractors, neoconservatives (and the apocalyptic right in general), DLC-types and Israel firsters within the ranks of the Democratic Party (and corporate America in general). He brought in largely the same (with a few limited exceptions) policy, and advisory people that Bill Clinton relied upon to push for and handicraft such policies as NAFTA, welfare ‘reform’, sanctions against Iraq (which were estimated to have killed a million civilians), and a crime bill (in which the biggest single allocation within it was for the construction of prisons) that supported policies (even though crime had been dropping in the United States since the early 70’s) that led to the incarceration of more Americans during the Clinton years than during the presidency of the eminently detestable Ronald Reagan (who Obama has lauded more than a few times, on the campaign trail, and since taking office, and has given every indication he will be pursuing Reagan-esque entitlement reform at some point during his presidency).

Prominent neoconservative David Frum (most famous for coining the warmongering phrase ‘Axis of Evil’) summed up the Clinton administration’s strategy and actions quite capably, “Clinton makes speeches, Rubin and Greenspan make policy [and now we know how that worked out!], the Left gets words, the Right gets deeds.” And on the left Michael Moore put it aptly when he said (after eight years of Clintonism), “The smartest thing the Republicans could do to continue the Reagan Revolution is to actively push for the election of Al Gore.”

Before Barack Obama was elected I argued that he would pursue typical American global hegemony and interventionism, and a neoliberal economic agenda at home (so there haven’t been any surprises); but I think it’s worth pointing out at present that Obama is not a hideous monster who hates non-American Arabs and Muslims (and others who are oppressed and even, at times, eradicated by U.S. foreign policies), and the citizens in his own country that can’t make ends meet via the crumbs they are apportioned in neoliberal America. Obama is simply pursuing the standard goals of technocrats, economists, practitioners of realpolitik (and other even more hawkish observers and theoreticians of international geopolitics), and really all of those who propose bipartisan ‘business as usual’ in the corridors of imperial power in Washington.

My intention is not to equate Obama with Eichmann or any other WWII era Nazi criminal, instead I only want to point out that bipartisan business as usual desperately calls out for a reassessment of the ideologies, policies, and arguments that are made in its support and unmitigated furtherance and continuation. If Obama is not capable of doing this, and developing a vision of global peace, sustainability, egalitarianism, and diversity; then he is falling victim to the same malady, that has stricken so many before him that have been at the service of ill-intentioned forces. That malady can probably most easily be identified, as the path of least resistance, embarked upon out of convenience and fear of how elite interests will react to a president who questions the direction of powerful, deeply entrenched forces in the United States and (especially) Washington.

Though Barack Obama is not a hideous, compassionless, rapacious creature he is typical (and does not distinguish himself in any meaningful way) of the kind of scheming, duplicitous professional politician, who works his way into 1600 Pennsylvania Avenue, and pursues unconscionable policies in the name of neoliberalism and a thirst for global empire. Though Barack Obama is close to as evil as any human being could ever possibly imagine him or herself to be, he should not be studied in a laboratory the way one might observe a John Wayne Gacy, or any other kind of fiendish serial axe killer. Instead, he should be considered alongside others who have sent individuals to die (and to have those individuals kill other, sometimes innocent human souls) in furtherance of career ambitions, in order to stay in good standing with the mores of ‘polite society’, and out of fear of treading too far outside the well worn path of conventional political orthodoxy.

Sean Fenley is an independent progressive, blogger, and aspiring writer