There is a new silliness in the Western Anglo Media, comparing the US Emperor's Czar program to the number of Tsars that Holy Russia had. It is a good thing that the US/UK public is ignorant not only of ancient history but also of recent history, otherwise they might start to worry. 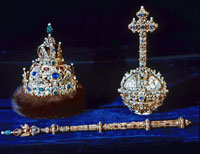 So let us go back and establish some historic references. Czar or rather Tsar, is a degradation of the Latin term Ceasar, similar to Germany's Kaiser. Ceasar, originally the family name of one Julious Ceasar, who almost became Rome's first Emperor, before his assassination, lent his family name to the title of Roman emperors.

The first use of the term in Russia was during the reign of Ivan Grozny (Ivan the Feared, which the Anglos mistranslate to "The Terrible") Before this, the term " князь " knyaz or " принц " prince, was used. The Moscow princes, being the new center of the Rus, Kiev being held by Catholic Poles, were called the grand princes (велики князь).

Ivan Grozny got the other princes under his rule, to refer to him as Tsar. They did it to humor their half mad overlord, not realizing the importance of words. Ivan, however, knew their power and that of titles in the human psyche and knew that once the title of Tsar stuck, he and his prodigy would forever be associated as some one absolutely separate and above the regular knyazi: an emperor rather than a challengable grand prince.

Now we forward several hundred years to the Wall Street sponsored Russian Revolution and Civil War and the Marxists take over of Holy Russia.

In order to control the vast nation and its revolutionary reshaping during a chaotic time, Lenin and later Stalin, created a system of Commissars. These were not limited to military and instilling party loyalty, but were used throughout Soviet society. A commissar and his staff had absolute authority, answering only to the dictator and by-passing the various local councils and people's senates. Two things to note here:

1. their spheres were ambiguous and often over lapped responsibilities of other commissars. This in turn caused a large volume of infighting. Sure this is very wasteful of resources and confusing, but what it does do, is allow the dictator to keep ultimate power by keeping his most powerful minions at each others throats with the dictator as the ultimate arbitrator of power.

2. The commissars were mostly young, had little achievement outside the power structure, self assured, true believers. They knew very well that outside their positions, created and granted by the dictator, they had little hope of career success. They were given responsibility much higher then their experience levels, further beholding them to their owner. It made them extremely jealous of their power, which in turn made them vengeful against anyone who stood in their way, especially other power hungry commissars.

Fast forward to modern transitional America. The American Emperor has taken the six commissars of his leftist predecessor and created at least 28 more. Yes, commissars do multiply quickly at first and many more are in the works, until the American parliament (congress) and the oblasts (states) assemblies (state senates) are powerless show pieces and all power centers (commissars) flow only to the dictator.

So while the Anglo owned talking mental traps compare the American commissars to Russian holy emperors (Tsars) answerable to God, the Church, holy and societal tradition, the nobility and popular uprisings (we had plenty).

The Commissars (Czars) of Emperor Obama, answerable to none but the Emperor, consolidate power on a level realizable only in the Marxist, Godless society of absolutes, not in a traditional Orthodox Christian monarchy.

So Americans can call them what they want, but we Russians and the US emperor know their true name: Commissar.

13:45
German Chancellor Scholz speaks about visa bans for all Russians
16:22
NATO wages war against Russia through the hands of Ukrainian people
15:00
US dollar smile can only make other economies toothless
20:56
Russia and China may form military alliance to counter Western aggression
17:26
Russia confirms explosions near military airfield in Crimea
16:54
Russian Foreign Ministry lashes Estonia for its call to ban Russians from Europe
16:05
Explosions in Crimea in the area of military airfield
14:35
Instead of new arms, Washington presents Zelensky with 'black spot'
12:48
Le Figaro: Putin has a time bomb that will trigger major recession in euro zone
12:25
Not too much time is left for Ukrainian economy to collapse
Society
Russian porn actress stabbed to death in St. Petersburg