Ward Churchill and Death of Academic Freedom (part I) 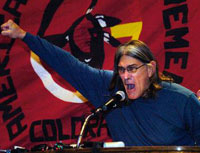 Ward Churchill and Death of Academic Freedom (part I)

There is a popular adage that states: “Only two things are certain—death and taxes.”

Now there is a third: “It is certain that the constitutional rights of the individual will always be sacrificed to appease a governmental and/or economically powerful entity.”

Churchill was fired from his position at the University of Colorado (hereinafter CU) after writing a controversial essay shortly after the 9/11 attacks, comparing some of those killed in the World Trade Center to Nazi leader Adolf Eichmann.

To avoid the appearance that Churchill was terminated for exercising his first amendment right to freedom of speech, CU instead accused Churchill of engaging in plagiarism and other forms of “research misconduct.”

Yoo, by contrast, remains a tenured law professor at another university even though, while serving in the “Justice” Department during the dictatorship of George W. Bush, he authored controversial memoranda that endorsed the use of torture, extraordinary rendition, and the denial of due process of law, while also claiming that Bush, as president, had the authority to void the Constitution and Bill of Rights, deny Americans their fundamental freedoms, and detain them without charge or trial.

In “A tale of two academics”, I argued that even though Churchill’s actions seemed to cause more outrage in America than Yoo’s, there are three reasons why Yoo is more deserving of condemnation: 1). Yoo’s memoranda possessed the power to influence governmental policy. Churchill’s essay did not; 2). Churchill expressed his views openly, while Yoo hid behind a wall of government secrecy and bureaucracy; 3). Yoo was surreptitiously working to murder the Constitution and Bill of Rights, while Churchill was breathing life into them by exercising the very rights these documents were created to protect.

Shortly before I finished writing “A tale of two academics”, a Colorado jury concluded that Churchill had been fired from CU for expressing his political views, and not because of any alleged “research misconduct.” In San Francisco, around the same time, federal district court judge Jeffrey White ruled that Yoo could be sued by Jose Padilla, an American citizen who was victimized by Yoo’s policies of torture and detention without charge or trial.

Thus, for a brief time, it appeared that American justice was working. But, having witnessed throughout my legal career how fleeting this so-called “justice” really is, and how the American power structure tends to reward those who promote injustice while penalizing those who fight against it, I also wrote that “anyone familiar with American jurisprudence knows that such victories are fleeting in a legal system that labors harder to rationalize injustice than it does to produce justice.”

It appears my statement was prescient: Two significant developments are now underscoring the sociological ramifications of the Churchill/Yoo dichotomy.

First, the world of academia recently embraced another war criminal and torturer when Texas Tech hired Alberto Gonzales—attorney general of the United States under the Bush dictatorship—to teach political science.

This is the same Alberto Gonzales who allegedly used the “Patriot Act” to illegally spy on American citizens; who so zealously sought to continue this spying program that he attempted to dupe his predecessor, a hospitalized and disoriented John Ashcroft, into signing an extension order; who tried, while serving as attorney general, to present a public façade of “morality” while he privately endorsed the use of extraordinary rendition and torture; who answered “I do not recall” at least seventy times when testifying before Congress about the circumstances that led to the politically motivated firings of eight United States Attorneys; who was suspected of committing perjury when the Senate Judiciary Committee questioned him about the illegal spying program; and who resigned in disgrace in 2007.

I hope that others, besides myself, can appreciate the hypocrisy of Yoo and Gonzales teaching law and politics when the foundations of these subjects are the Constitution and Bill of Rights—the very documents they made every effort to destroy.

Second, despite the jury’s finding that Ward Churchill was wrongfully terminated from CU, Denver district court judge Larry J. Naves refused to reinstate Churchill to his professorship position or award him any financial compensation for lost wages.

In reality, such an outcome was predestined. Blaming American foreign policy for spawning acts of terrorism automatically made Churchill a pariah in the eyes of the legal system, just as Malcolm X’s “chickens coming home to roost” statement in the wake of the John F. Kennedy assassination made him an outcast during the early 1960s.

So, despite Judge White’s ruling in the Padilla case, it is a sure bet that Yoo will never have to pay Padilla a penny in damages, largely because of the same specious reasoning used to deny judicial relief to Churchill.

Not surprisingly, CU’s president Bruce Benson lauded Naves for “appropriately applying the law.” But what “law” did Naves actually apply? Obviously the only one that truly matters in the United States: the “law” decreeing that the rich and powerful must always work to protect the interests of the rich and powerful.