Michael Jackson was H-Bomb for diversity 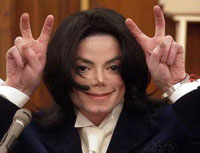 Michael Jackson was H-Bomb for diversity

No matter what the truth is about Michael Jackson’s personal life, historically, he was an H-bomb in the service of diversity, multiculturalism and equality.

He was a weapon of mass destruction against racism and national isolation.

He was black; he was the first true global superstar; he was incredibly talented.

He led the first big advance in the cultural sphere for a united and cooperative planet.

So from the perspective of human history, Michael Jackson was a great revolutionary for peace, and a great explorer of human collaboration, and a great inventor of a common cultural language.

He was a human H-bomb that blew away the castles and forts of the old world, and has helped lay the foundation for the one great Home of all humanity.

Innoye is an American writer. His new book “The Axxiad” is now available from a link on his blog, or from Lulu.com, his email address is [email protected]