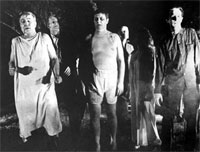 There are dead philosophies and ideologies in the beginning of the 21st century. However, they don’t know they are dead. They are Zombies, the living dead. But they think they are alive! They walk and talk and bump into each other. Stunned, they are unaware that they are actually deceased -- dead people following a dead ideology. They are Zombies!

They spout Conservative theories, deregulated capitalism, greed, selfishness and war. They are bigoted; they are anti-poor, anti-minority and anti-Third World. They are against global cooperation, and want to resurrect Imperialism and a new Cold War.

You can see them running Zombie election campaigns, and hear them on Zombie talk radio.

Perhaps you have heard their new slogan: “Zombies of the world unite, you have only your tombs to lose”?

We need to put them back into the crypt of history where they belong. Join the Anti-Zombie Front, and unite with others so we can create a new civilization, based upon new ideas and new principles, and upon humanism and morality itself. Stand up for living and complete human beings, and not for cold and compassionless Zombies.

And beware of the Zombie propaganda; they are trying to turn you into a Zombie too. Become a full human being and don’t become a Zombie!

Membership requirements for the Anti-Zombie Front:

2] Must be a Human Being

Innoye is an American writer. His new book “The Axxiad” is now available from a link on his blog, diversephilosophy.blogspot.com or from Lulu.com , his email address is [email protected]