Fartmania: a brief and humorous essay on flatulence 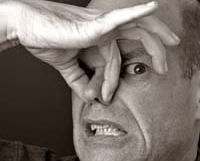 Fartmania: a brief and humorous essay on flatulence

In German it is a Furz, in French a pet and in Spanish a pedo. The fart is universal, and even Beano and simethicone cannot completely suppress it. I doubt if anyone is immune to gas. Some have been so curious as to classify the flatus: slicers, juicy ones, silent-but-deadly ones. Or farts that come from doughnuts, and so on. The juicy fart is with good reason said to be a real stinker (pun intended). As every fart connoisseur knows, it comes from deep within the rectum, flaps the anus multiple times and then grosses out everyone within nose shot--and those so unfortunate as not to be upwind,--at which time you could ask, do you have that fart on a leash?

Breaking wind is certainly unsociable and embarrassing, but some people cannot help it. One should not fart in an elevator, on an airplane or God forbid in a restaurant. However, the true flatus connoisseur also sometimes, strictly in private, enjoys putting his hand to his butt, letting rip and bringing his hand to his nose for a good wholesome whiff. I myself have seen this. He "gets off," so to speak, on his own fart. I am told that the odor, far from being repulsive and deadly, is aromatic and satisfying. Indeed, we are all immune to our own odors; our own B.O. and halitosis do not bother us, and neither does our own gas. There you have hoist with your own petard!

A note or two on the attempt to get away with a public fart is in order. Some people who fart in public are so embarrassed that they try to ignore it or blame it on someone else. For centuries man's best friend, the poor pet dog, has been abused in this manner. Another tradition is knocking on wood, though in the eagerness to be free of having blasted away, some people get into disputes over what may or may not count as wood, and you hear the plaintive cry, "Did you have to?" Or, "Couldn't you do that outside?" Or, with a red-faced grin, "A sigh is a heave from the heart; if it goes the other way it's a fart." Wives are very wary of serving beans and sauerkraut to their husbands. Verily that could lead to a flatulent time in bed and break up a good marriage.

It is claimed that men fart more than women, but this needs some stipulation. Men do enjoy letting it out and laughing as women suffer. Some feminists have even taken up the cause and advocate an antifart vow in the nuptials ceremony. Men do excel in the quantity and velocity of farting, but women's farts have a unique odor that occasionally makes up for their lack of thunder. They are narrower in the nose, so to speak--or something, since odors are hard to describe. Men, unlike women, are socially permitted to celebrate the fart--to make light of it, to not hold it back and to get a big laugh out of it. The sales of Beano are just a smoke screen; the fart is beloved among men. Blessed art thou who fart; which reminds me of "He who farts in church must sit in his own pew."

In conclusion, the lowly though celebrated fart--out-loud or silent-but-deadly--takes its place in the valhalla of things providing both mirth and disgust.

John Fleming is the author of Word Power: A Dictionary of Fascinating and Learned Words and Phrases for Vocabulary Enrichment. This book may be purchased by phoning 1-800-462-6420.