Thinking out of both boxes of history 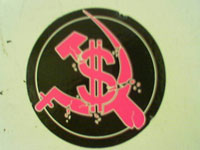 Thinking out of both boxes of history

Each box failed -- capitalist culture most recently, just last year. It continues but it is essentially over, its economy is severely weakened, its integrity is lost, and capitalism’s credit report score is so extremely low that it wouldn’t even give itself a high interest loan.

But unfortunately many are still caught up in the training, the imprinting, and the habits of the obsolete culture. These individuals need to break out of their trance states. This means having consciousness and self consciousness too, and not walking around empty minded and just responding to marketing stimuli like Pavlov dogs. We have been living in an “online live saliva nation” of excessive consumption and self absorption; it is time to break out of our box, to think creatively outside the cells assigned to us.

This methodology is “iso-think”, it is the thought technique of offering singular, narrow, simplistic solutions to complex problems. In iso-think you believe there is one answer to everything -- one law, one theory, one principle, one cause, one source, one point of view, one behavior, one culture, one value, one purpose, one function, one need, one leader, one mind, one power; one, one, one, always one. Isolation is the perception and method of cutting up relationships, connections, collections, or wholes in a search for an absolute truth, essence, law, principle, ethic, concept, theory and so on.

Can we find another way that avoids extremes and excess? Do we have the mental capacity to hold two ideas at once? We aren’t that dumb are we? Are our memories so poor that we can only hold one notion at a time? We do it all the time, in many ways in school, in our jobs, in daily life. However, for some reason when it comes to primary values and principles we lapse into the lazy behavior of iso-think. Why is that?

One-sided and simplistic ideas exist for a reason -- they serve power and systems based upon pure individuality, pure group, pure money, pure state control and so on. There is an untoward power in iso-think. Its concepts and psychology lead to submission of all other values to the pure value, all other institutions to the pure leading institution, all other humans to the pure human leader, who has the admirable “8 personality traits of the Iso-personality and successful people”. We are compelled to jump to our feet and shout “All hail the “Purer!”

This extreme thinking has a sort of evil power; it is an invasion force that smashes all resistance. It rigs up simple systems that work and are easy to control. Everyone knows what to do; a hierarchy of power is established, everyone seeks the iso-value in their way at their level. And in fact in such a system there is nothing else to do but pursue self interest and career. No other activities are permitted.

Conversely, opposition to this absolutist behavior leads to free thinking, cooperation, complex thinking, diversity and democracy. Knowing all of this, can we find the middle way that eliminates the extremes and retains what is sensible, that considers all, finds a balance, and thinks in wholes?

Yes, but this requires something that previous systems found repulsive: Creativity. In the overly simplistic path, there is no creativity. One holds onto a dogma and repeats it ad infinitum, ad nauseum. How easy is that? Capitalism and Communism are the ultimate dummy-down systems in history, and this is very sad because we are actually so much more intelligent as a species.

In the age after the two boxes of history there is too much to do. There is so much to build. We have general tasks: We must take what is good from each system, discard what is not, but fundamentally create brand new things, then assemble these collections. In this age there many, many problems to solve, much creative work to do. We need new businesses, new education, new government, new media, new art, new entertainment, new foreign relations, new cities, and new personalities, and new views of the relation of the individual to society.

It is harder work to think out of boxes but more rewarding both personally and socially. The creative work itself is and will be joyful, the results of the work will be very satisfying, the emotional rewards for improving the state of humanity will be beyond compare.

In 2009 are two boxes of history. It is not often in human history when people have been faced with such stark choices about opposites, and with such clear empirical data on the performance of these systems. So let’s begin to think out of both boxes of history.

And thinking out of both boxes of history will actually allow us to have a “history”, for if we don’t, then there will be no history at all, it will have gone into syndication and reruns.

Innoye is an American writer. His new book “The Axxiad” is now available from a link on his blog. Here is his email address.