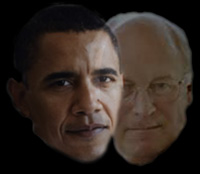 This week saw the not insignificant spectacle unfold of both President Obama and Vice President Cheney making back to back and fundamentally opposing speeches on the US approach to the war on terror.

It made for great TV and the length of both probably ensures that hardly anyone will read all of either, but most stark and worrying of the two was a mindset revealed by the ex Vice President that seemed almost alarmingly out of date in the context of history and what we already know about combating terrorism.

Right from the outset we are told that the Bush administration’s efforts to fight terrorism directly post 9/11 and for the seven year period thereafter can ultimately only lead us to one of two possible conclusions – “You can look at the facts and conclude that the comprehensive strategy has worked, and therefore needs to be continued as vigilantly as ever. Or you can look at the same set of facts and conclude that 9/11 was a one-off event – coordinated, devastating, but also unique and not sufficient to justify a sustained wartime effort.”

This, in Dick Cheney’s mind, is the only way the issue can be interpreted.

The reality, however, is that there is an entirely different and third alternative on offer here, which he apparently fails to see at all.

Option 3 could just as easily be to perceive that, whilst a sustained wartime effort is needed to combat this peril, the strategy that has been employed for the last seven years is in fact not effective enough and is actually far from comprehensive at all.

In President Obama’s speech by contrast, he referenced two specific approaches, which many feel were neglected by the Bush administration and dangerously so at that – “providing the necessary resources and strategic direction to take the fight to the extremists who attacked us on 9/11 in Afghanistan and Pakistan” and secondly “renewed American diplomacy so that we once again have the strength and standing to truly lead the world” – equally vital bearing in mind the new depths of global unpopularity the Bush administration took the country to.

One could be forgiven for thinking that Vice President Cheney’s simplistic view of the problem sounded not at all dissimilar to his own President’s famously stated sentiments to a joint session of Congress in 2001 that "Either you are with us, or you are with the terrorists."

The logic is that, if you do not agree with Cheney’s solution to the problem, then that can only be because you are a weak-kneed, spinless, liberal whose bleeding heart, rose-tinted glasses, tree hugging view of the world results in not actually seeing what the problem is in the first place.

Inherent in this mind set is the age old view that the only approach terrorism is by military force alone – a fight fire with fire sort of mentality.

But what is fatally missing in this perception of things is the ability to understand that defeating terrorism of any kind has always been a complex matter and a simplistic good guys/bad guys approach is nearly always doomed to failure.

It’s not that you have to complacently see the events of 9/11 as a one off and therefore fail to respond adequately. It’s that you have to seem them and respond smartly and never make the classic error of seeing it in black and white terms only, something which is a guaranteed way of dragging the situation on for many more years to come.

I was reminded of comments the conservative US TV show host Bill O’Reilly made to an email from one of his viewers recently who remarked about the terrorism and bombing campaign that was waged in Northern Ireland throughout the ‘80s during a debate on the use of torture.

O’Reilly scolded the viewer with the reminder that the British Army had used some very rough and harsh detainment and interrogation tactics there, as if to some how rather bizarrely imply that this is what had lead to a solution to things there and the peace the region now enjoys.

Of course, historically, the analogy was quite inaccurate. It was in fact those very brutal tactics used by the British Army that served to only alienate the Catholic community there, foster support and sympathy for the Provisional I.R.A. and provide them with hundreds of willing recruits thereafter.

Sadly though, history has taken a back seat on this journey. No better a reminder do we need of this than the Vice President’s stark assessment that in the war against terror “there is no middle ground”

In this view, Cheney’s flies in the face of history which demonstrates clearly how, time and time again, those who have started of as being labeled as terrorists have so often ended up being incorporated into the democratic political process afterwards that has brought about a solution.

The re-election of the A.N.C. with a sizeable 66% of the vote in South Africa recently should serve as an obvious reminder of this, as an organisation who were initially banned as terrorists in 1969 and spent the next two decades involved in a violent and bloody struggle of violence.

That’s not to suggest that anyone should even consider the notion of appeasement of any kind with extremists like al-Qaeda (although tell that to the government of Pakistan and Sufi Mohammad and his fanatically pro-Taleban son-in-law Maulana Fazlullah in the Swat valley).

But what it is to say is that if your view of this problem is one that fails to recognise that a legitimate alternative to you exists then we are all probably off to a bad start here right from the get go.