Fifteen-minutes Empire or an 'Eternal Republic'? 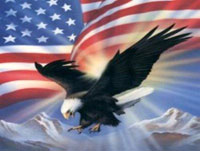 Fifteen-minutes Empire or an 'Eternal Republic'?

The American Empire lasted from 1945 to 2008. In historical time and in Warhol time that is 15 minutes.

America ’s day as top superpower is over. And it is time for us to rethink our identity and our ‘destiny’.

We should be thinking now in terms of ‘eternity’, that is, what can the United States of America give to the world? We ought to ask ourselves, what do we want to be known for in history thousands of years from now?

We have the potential to become an ‘eternal republic’, that was our original calling, but somehow we got lost on the way. We were supposed to be the nation that showed all nations how create a republic of individuality, diversity and creativity, how to create a generous nation of cooperation, mutual respect and aid. What happened to us?

15 minute empire or eternal republic? How do you want to be known in the Wikipedia entry on America a thousand years from now?

Innoye is an American writer. You can contact him at his blog, or at his email address. He is working on his upcoming book, “The Axxiad”.