After Karl Marx, another view of history 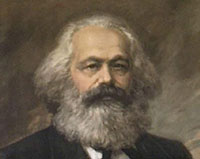 After Karl Marx, another view of history

Two peoples are at war today in a very interesting and symbolic conflict -- Afghanistan and America, a very tribal culture vs. the most advanced culture on the planet, one culture near the beginning, one very far away. This raises some interesting questions about history.

Karl Marx gave us a perspective on history focusing on class struggle. It was called ‘historical materialism’. Here is offered another thesis that is based on the principle of ‘differentiation’. In the cosmos all things differentiate over time, they become more diverse, more individual, more particular over time. This is a long-term process in the world too, call it ‘historical differentiation’.

In this view, class struggle is incorporated as one type of ‘differentiation’ though it is modified here. The general notion addresses not only classes but all forms of inequality – gender, race and more. The thesis also appends the class issue with problems in the formation of individuality. It addresses the rise of social institutions, the rise of complexity in society, and the war of institutions. It addresses the consequent war of minds within the brain. It addresses the appearance of false ideologies and delusions like consumerism and more.

What is the fundamental theme of history? It is the same as the whole cosmos! It is differentiation -- the creation of difference, individuality, particularity, complexity. Humans are no different than over living organisms or inanimate things. This force produces galaxies, planets, living things, humans, human minds and human society.

This differentiation must begin somewhere. For the cosmos it begins, at least as far we can trace it now, in the Subsume of a singularity and then the ‘big bang’. A Subsume is an origin point where all things are fused and confused, and all future things exist in potential. At some point, there was an earth Subsume for nascent life, though we don’t know yet what it was and when, but it ‘elaborated’ outward into many species and an ecosystem. Then human Subsumes appeared in evolution too. For the purposes here concerning modern history, we begin in another Subsume -- that of the tribal village long before the rise of ‘civilization’.

Individuality arises as people become more aware of their unique identity and inner powers. In addition, they are disconnected from the new state; they are now alienated and alone. They either accept the new situation or they band together into new religions of connection or they rebel.

The mind also differentiates; where all was once fused, now a split begins, then comes minds of logic-science vs. spirit vs. subconscious vs. the mind of doing vs. emotions vs. wisdom vs. creativity. All once mixed in a whole mind, all interconnected, now it is shattered; people choose which house to live in and champion it.

Old tribal perspectives are gone. Economics that was supposed to help the whole tribe has vanished, classes get rich. Education that was supposed to be about life has been replaced by new curriculums. A priest replaces the old shaman; religion is removed from community and daily issues of life. Feelings of tribal brotherhood are gone. Intimate connection to Nature is gone. Ancestor religion is gone; no more connection to your family, immortality is redefined. The dreamtime is gone.

After the tribe, war is everywhere. The war of individuals, war of social classes, institutional war, mental war, and ideologies justifying this war all appear together.

This then leads to some groups abusing other groups or the majority, the ‘people’. Or it leads to neglect of some groups or most groups by elite and controlling people.

This process began thousands of years ago. It first produced city states all over the planet. In the West, this process has been most extreme and most advanced. But by ‘advanced’ it is not meant ‘healthy’.

This break up of the original tribal subsume did not have to happen, it did so because we were ignorant of the process and its consequences. This ‘negative differentiation’ or ‘negative elaboration’ has dominatedfor some time. Yes, good things have happened too within all of this. Discoveries, inventions, industry and sciences, but much of this came as a super-focus or even obsession -- because some ideology, class or institution ruled and promoted its biased view of the world and one human need against all other.

The ancient Greeks were not like us at all though we like to pretend they were. In China and the East the negative differentiation did not go so far. One can argue that other cultures went in the extreme direction of the religious or imperial. And this is true but the West has outdone them in shear excess.

In Europe there was rise of science, technology and capitalism. England was most advanced in this process however its cousin, America, outdid it. The USA is the most advanced in this kind of destructive elaboration about money, extreme individuality, alienation, consumerism, culture and mind wars, technology obsession and blindness to the environment. America has pioneered its unique form of negative differentiation. At the same time, in the USA are seeds of an escape from this law of history, from this negative process into a healthy differentiation.

The USA beat its competitor the Soviet Union and won. And we must note something about Russia: The socialist revolution in Russia took place precisely because of a proximity to the tribe. Russia was not Western Europe, workers came from communal villages; they spontaneously created the Soviets, the worker’s councils, for self-administration.

Eventually, communism of course undermined the Soviets but the point is that communism was a reaction to history, not history itself. Communism arose as an antidote, partly seeing the process, partly ignorant of so much more of the process. It did not recognize the whole process about evolving individuality, all realms of the mind, all forms of elitism and inequality, the diversity of all institutions.

Terrible abuse and neglect happened in communism too, though its original intentions were to escape this horrible historical progression. It fell. America was able to push further recklessly down its road; in 17 years America accomplished in 2008 a breakdown. The locomotive of the great train of history is off the tracks now.

Offered here is another way of looking at history -- a history of differentiation and elaboration that did not have to be, but occurred because of ignorance, power and wealth.

Where are we then in this long human evolution? In the USA, the program should be to accept individuality as a historical process but promote healthy individuality and limit alienation and selfishness. Individuality should be appended with social activism, caring and building new institutions. Principles and ideals are key -- when your new world does not exist, you need ideas first to drive you to create it. The tribal person did not need ideals of community because the connection was there, they lived it everyday.

Social institutions, principally, business and the economy should not be allowed to control or destroy other institutions like education, government, healthcare and more. Democracy should include a diversity of institutions that should work together. We should promote equality and help the victims of poverty. Negative psychologies and ideologies that come from consumerism and entertainment should be abandoned. And we should change the way we use our brains, we must use all our brains, and learn how to manage our complex minds and emotions.

The general themes here are balance, connection and the whole. Complexity is good, individualization is good, creative development of new things is good, technological advance is good. As long as we stay connected, in balance, and as wholes, this is all very good. We cannot stop evolution and creativity, and we should not try. These are fundamental forces in the cosmos, in Nature, in humans, in society, in our minds. But there are consequences and vigilance is needed.

These are the lessons of the history of differentiation. For human beings the process must be conscious. From a tribal subsume comes elaboration. In our minds we often return to tribal subsumes, we mourn the loss of the days when we were all one, for the current world vexes us. We seek the ‘ideal’ time or ‘dreamtime’.

People right behind the USA in evolution should take pause, make a course correction.

Cage Innoye is an American writer. You can contact him at his blog, or at his email. His is working on his upcoming book, “The Axxiad”.