Prediction for a historic 'March on Wall Street of 2009' 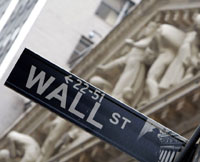 Prediction for a historic 'March on Wall Street of 2009'

The Obama economic team - most of them former Wall street insiders - is about to pour still more billions and trillions of taxpayers money into the bottomless well of derivative-related debts of insolvent banks and financial companies.

Such misuse of tax money - most of it paid by ordinary workers - can only serve to drain still more public wealth into the hands of the corrupt financial interests who caused the problem in the first place. The global hurricane of skyrocketing unemployment, housing foreclosures, and economic instability and suffering cannot be stemmed by more give-aways to the financial aristocracy of Wall Street.

Even the relatively mainstream U.S.Nobel-winning economist Joseph Stiglitz now says that the only solution is to nationalize the banks.

The time has therefore come for a nationwide U.S. "March on Wall Street' - a march to nationalize the banks. It is quite likely that such a march will in fact take place.

This march would be organized on a nation-wide basis inside the U.S. by the broadest possible coalition of progressive political organizations, trade unions, anti-poverty, anti-racist, anti-foreclosure, and environmental groups.. It would bring people from throughout the U.S. to culminate in a gigantic rally in Wall Street in New York.

Such a march would be organized around seven or so simple and clear points, such as:

1. Nationalize the Banking system and ban the use of exotic financial instruments such as derivatives.

2. Use nationalization to create Banking 'of, by, and for the people'

3. Use nationalization to ramp up the economy towards full employment.

4. Use nationalization to end all foreclosures.

5. Use nationalization to support financing of clean energy and ecologically sustainable products and services.

6. Use nationalization to end all give-away's of working peoples taxes to banks and finance companies.

7. Use nationalization to end the power of corrupt finance capital.

By 'nationalization of banking and finance' is not mean partial or temporary nationalization, with a view to handing back control to the same finance capital system which has brought the world economy to its knees. Nor is meant a 'bad bank' which will absorb the worthless mortgages and derivatives of the current system at tax payers expense. What is meant here is permanent nationalization which places banks and finance under public and democratic control.

With this measure, the American people would get something of value for their tax money - real working banks and finance systems - and not just worthless non-performing mortgages and derivatives.

With this measure, democratic control of finance by the people and their representatives would, at least in principal, be established.

With this measure, the social, and not just the 'for-profit,' aspect of finance could take hold.

With this measure the hold of corrupt financial interests which currently hold tremendous power inside the U.S - and have incalcuably damaged the world economy - would be broken.

When it comes to life-and-death matters , like blood flow in a human being or finance in a market economy, stability is more important than innovation, and the public interest must take precedence over private ownerships and private profit.

Ideally, the March on Wall Street would form one part of a coordinated "Global March onBanks' day, with marches in each country where private banks and finance companies have corrupted and partially or wholly broken the economy.

In Britain, for example, the march could target the area of London known as 'The City' where the majority of Britain's', and much of the worlds', financial control is vested. As with the March on Wall Street, the key demand for each march can be creating democratic control of finance through nationalization of banks and financial systems.

Professor John McMurtry observed in a recent Canadian Global Research article that the key issue at this crucial moment is who now runs the economy and finance.

Whatever we think of Obama, and despite his other progressive policies, it cannot be denied that almost his entire economic team has been imported from Wall street. ‘

Secretary of the Treasury Timothy Geithner was head of the NY Federal reserve bank - and one of Paulson and Bernackies right-hand men during the decision to transfer of 800 billion to the banks. He was also chief assistant to previous secretaries of the treasury who put forward deregulation measures which paved the way for the current crisis.

New 'economic czar' Larry Summers is a former Secretary of the Treasury who has a long history of working for the de-regulation which made banks and bankers rich while preparing the ground for the current crisis.

Gary Gensler, the choce to head the Commodity Futures Trading Commission, also drafted legislation in 2000 that exempted the now notorious derivates - including credit-default swaps - from regulation.

Securities and Exchange Commission choice is Mary Schapiro,who previously headed the so-called self-regulation body of the finance industry, which did nothing to stop the extraordinary speculative bubble of that time nor to investigate Bernard Madof, who has now confessed to operating a $50 billion Ponzi scheme on Wall street.

Such are the people currently in the seats of financial power in the U.S. They are, moreover, publicly committed to giving away, under one guise or another, still more hundreds of billions or even trillions of tax money, most of it from working people, to the bankrupt institutions run by their financial friends.

With unemployment, housing foreclosures, and world-wide economic chaos increasing by the day, it is essential to take the power and initiative out of their hands. This can only be achieved by mass organizing.

Organizing for a U.S.nationwide 'March on Wall Street' can serve to catalyze opposition to more give-aways to the banks, and to build support for nationalization of the U.S. banking and financial system in order to implement democratic control of U.S. finance to 1) Prevent further give-aways of working peoples taxes to banks and finance companies; 2) promote economic stability; 3) Make possible rational investment to create jobs, green industries and technologies; and 4) End foreclosures and the domination of corrupt finance capital.

It's time for groups organizing around unemployment issues, anti-poverty issues, anti-foreclosure issues, environmental issues, and trade union issues to come together under a new banner: March on Wall Street to Nationalize the Banks.

Organizations or individuals interested in working for the March On Wall Street can sign-up for an online discussion group at: http://groups.yahoo.com/group/MarchOnWallStreet/