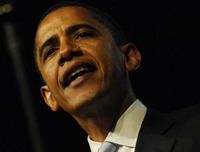 I know that World leaders are fully accustomed to conducting business with all manner of criminals, terrorists, dictators and other illegitimate “leaders” of Nations.

But Obama may be different, as no one knows his real name, his place of birth, who his true parents are or even his actual birth date.

Every relationship must contain an element of trust. Without trust, marriages, business relations, families and friendships are destroyed. At the least, constructive progress is stymied.

America is said repeatedly, to be a “Nation of Laws”. It is not. It is a Nation under the control of mob rule. When the American public understands that, America will be a Nation of Anarchy.

Obama not only refuses to show proof that he is eligible to become President of the United States of America, but he has spent hundreds of thousands of dollars to prohibit any one from discovering his true identity or his history.

Any orders he gives to the American military are subject to being refused. Orders that Obama gives to America’s Joint Chiefs of Staff of the military can be refused. If Obama doesn’t like a particular Chief of Staff, or all of them, theoretically, he can fire them and replace them with new Staff. But even the order to fire a Chief or to demand his resignation can be lawfully refused by that Chief of Staff.

The security and abilities of NATO are being compromised as well as current agreements and Treaties around the World.

The only power Obama will have is that which is illegally permitted by a corrupt government.

The United States Congress is required, under the US Code of Federal Regulations to count the Electoral College votes for President and Vice President, ask if any member of Congress objects to the count and hear that Congressman’s objection. This is under Title 3, Chapter 1, Section 15, “Upon such reading of any such certificate of paper, the President of the Senate shall call for objections, if any”.

The US Code can be found by clicking here, or go to this URL: http://uscode.house.gov/

January 8, 2009, the President of the US Senate, Dick Cheney and the US Congress failed to abide by the US Code of Federal Regulations by not calling for objections. You will see this failure on this video below, at the 20 minute point. Stay watching the video and you will see that as Dick Cheney is reading, some commotion happens on the floor of Congress, Nancy Pelosi, Speaker of The House, jumps up and starts clapping hysterically and then you will hear rambunctious applause by Congress, for no apparent reason. As the camera pans the Congress members you will see that some are not clapping and there is one man with his arm up in the air.

By the inaction of the President of the Senate to call for objections, the certification of the Electoral votes was illegally obtained. This is another reason that makes Obama ineligible to be President, as well as neutering the US Congress.

By Congress illegally certifying an ineligible person for President they have violated their oath to defend the American Constitution. They have proven that the highest oath they can promise to, means nothing to them. Their word, their promises, their oaths, their agreements and the existence of their lives are totally worthless to an honest society.

A concern of all World leaders should be: “Are these the kinds of people we can do business with?” Where can trust be found amongst a group of people who do not respect and obey their own laws and rules? I accept that doing business with criminal organizations is a part of government function, but many World leaders have been embarrassed or removed for consorting with a liar.

There are oven one dozen lawsuits against Obama, asking for proof that he is eligible to become President. To see them got to: http://americamustknow.com/lawsuits.aspx

Phillip Berg has a case before the US Supreme Court. All documents can be found at Obamacrimes.com.

Dr. Orly Taitz has a case before the US Supreme Court and has any military people as plaintiffs. Her case can be seen here: http://drorly.blogspot.com/ Various well funded groups have vowed to continue suing him against every decision he makes.

The American Congress and the ineligible President have themselves proven, that they have no respect of rules, regulations or laws.

What Nation would be naïve enough to think that their agreements with America would be honored? What Nation can guarantee to its people that Treaties or agreements of any sort will be honored by future American administrations?

International gangster operations succeed because the members have a relationship of some degree of trust. Trust is an unknown and non-existent factor for Obama.

Every Nation on Earth that has taken the path of secrecy and refusal to obey the “Rules of The Game” such as Obama and his allies are taking America on, have failed. More importantly, they have left their gullible Partner Nations in misery and chaos.

Obama and his supporters are international con men. They have much money and power, but they are stupid and most likely insane. History has proven this to be a very dangerous combination.

This is what all World leaders must consider: You can protect yourself from a burglar or an armed robber, but the only protection from a liar, is to deny communications with him.