Peace is just for the massacred, by Milton Hatoum

The army of Israel is powerful enough to destroy the entire Middle East (and, in fact, also to destroy a significant part of the west). The only problem is that, up until now, it has never managed to succeed, even in the territory which would suit them to be in charge of. The most powerful army of the world is held, still, by the Palestinian resistance. How to understand this contradiction? 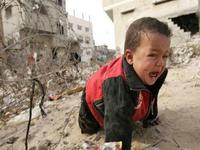 Peace is just for the massacred, by Milton Hatoum

Well, for starters, Israel never worked to build peace with the Palestinians; never used other means which were not the means of extermination, ethnic cleansing, Holocaust, to kill the native population and residents in historic Palestine, from the foundation of the State of Israel in May 1948.

Israel expelled 750 thousand Palestinians, converted them into refugees and then began to systematically prevent their return and their children (today, also, already, the grandchildren of them), in spite of UN Resolutions, at the same time they continued to destroy cities and towns, or - what is the same thing - started to build occupation colonies on the ruins of Palestinian cities and towns.

Since 1967, Israel did everything that a state could do to make it impossible for any political solution: it colonized territories, occupied by illegal roads and refused to respect the boundaries before the invasion of 1967, built an apartheid wall, and made life impossible for the majority of Palestinians. Nothing, then, wou even make them think about peace efforts. As before, the operation is continuing towards systematic ethnic cleansing in the illegally occupied Palestinian territories.

Therefore, tp implicate peace - as it necessarily means - the end of the mini-empire built by Israel, Israel will continue to do what is in their power so that there is no peace, even if the peace it offered on a tray, as the Saudi peace initiative, recently, for example. Again, one does not understand: if the Israelis were only waiting for such an offer, if they wanted some peace, but they rejected it, practically without even considering it?

So much of the time Israel rejects any and all possibility of peace, that most Israelis are no longer able to see what rejecting peace has become for Israel, a sort of second nature.

But the most terrifying reason why no peace initiative ever had any chance to advance has to do in fact, with us, with the west.

Israel continues to be supported by Western democracies as a sort of delegated power, like an advanced western stronghold, located at the entrance of the Arab world, more vital, so more dependent on the West, as regime-clients, like the Saudis and Iraq with Saddam until 1990.

A kind of 'incarnation' of the thesis of the "clash of civilizations" of Huntington, Israel is, as ever, more exposed or more shrouded, a bastion of the Jewish-Christian world against the Arabs and Islam.

This was true for decades, but has never been more true than in the last decade, when the New World Order came into terminal crisis, and the "Doctrine of Shock" and "Shock and Awe" began to be heard from several desert storm 'operations' in Asia and always against the Islamists.

Israel, not Iran, has nuclear weapons and is able to use them - and repeatedly has threatened to use them. But speaking as if the threat came from Iran, not Israel, those who propose the destruction of Iran are the same merchants of tragedies that foisted to the USA and England the high cost of the Iraq war.

The one who writes is Haim Bresheeth, professor of Studies on Media in the University of East London, quoted by the most winning contemporary Brazilian writer, Milton Hatoum .