Bush to write a book?

George W. Bush has already written it with his actions – the history book, which will judge him for the rest of eternity and which will be his legacy and political epitaph. And here, the journalists of today have a collective responsibility to make sure George Bush does not get the chance to write the pages to pull the wool over the eyes of the readers of tomorrow. 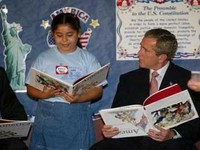 Bush to write a book?

As rumours come out of the USA about the possibility of President Bush writing a book, a few home truths must be said. That George W. Bush is concerned about how history will judge him is as normal as it is evident. That George Bush will try to wriggle and squirm out of the legacy that he has created and use time to reinvent himself as a stern and strong political father-figure in difficult times, who at times was misled by his own staff, is only too apparent already. However, it will be today’s generations of journalists who let him off the hook, or who make sure he and his legacy stand the trial of publc opinion for the rest of eternity.

While one has nothing against George W. Bush on a personal level – and to be frank, he does come across in the odd snippet of film off-camera as being affable, an animal lover, having an easy relationship with children, to give him his due – he and his regime must face the consequences of their actions and stand as an example for the United States of America not to repeat ever again.

True, Richard (Dick) Cheney, who in his free time peppers his friends with buckshot, almost certainly stands at the epicentre of any axis of evil centred on Washington, along with Donald (the Torturer) Rumsfeld, Rove, Rice and all the weird and wonderful fauna from the two terms of the Bush regime, along with Bush himself. Yet as Oliver Stone’s film “W” tries to portray, it is not acceptable for George Bush to claim he was deceived and misunderstood, or in his own words, “misunderestimated”.

Misunderestimated he certainly must not be. Here is a man who as governor of Texas signed not one, not two, not five or fifteen but 152 death warrants. One hundred and fifty-two, while Saddam Hussein hanged after signing 148. The Bush regime collectively ignored international law, ignored the UN Charter, derided international public opinion and launched a brutal and illegal war based upon sheer lies and inventions. This very column warned against the theory that Baghdad was buying yellowcake uranium from Niger as being nonsense, quoting the words of Mohammed El Baradei of the IAEA.

The Bush regime attacked a sovereign nation without any case for a casus belli under any source of law whatsoever, civilian structures were targeted with military hardware for millionaire contracts to be doled out (without tender) to White House cronies, civilians were slaughtered, the USA became synonymous with torture, bloodshed, murder, rape and abuse of human rights, concentration camps, deprivation of basic rights and disrespect for due legal process. The CIA torture flights are but one shining example of the way in which this government addressed a national security issue based upon a 9/11 which raises more and more doubts with every day that passes.

In fact, the United States of America, under the Bush regime, sank to the very standards which it spent decades complaining about.

Certainly, George W. Bush will not mention any of this in his book – as if he will write a word of it anyway. It will be carefully scripted by a talented White House or Bush Family sycophant some time in the distant future, trying to carve out a statuesque symbol of the man who insulted the very foundations of his country, misled and lied to his people, divorced the USA from the hearts and minds of the international community and disregarded every fibre of the fundamentals of democracy and international law.

This is why George W. Bush and his odious regime, along with Cheney, Rice and company limited, must be judged for the mass murdering war criminals they are, the insolent scar upon the collective image and history of humankind, the pariahs among the international community of nations, regarded with utter contempt and derision even by former allies and it is up to us, the writers of today, to make sure they do not wriggle through the net to start portraying themselves as good folks, really. They are not. They spent eight long years smearing their arrogance across the globe and now that their party is left to pick up the pieces, future generations of Republicans would do well to remember that the GOP itself is indelibly associated with the tremendous and profound harm that this evil bunch of elitists has done to their people, their country and its standing in the international community for many decades to come.