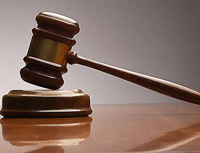 The International Court of Justice and World Court

The International Court of Justice (ICJ) was established by the UN Charter, Charter XIV, and is the primary judicial organ of the United Nations. The ICJ is established to settle disputes between nations. Chapter XIV of the United Nations Charter authorizes the UN Security Council to enforce the ICJ rulings, but such enforcement is subject to the veto power of the five permanent members of the Council.

1. All Members of the United Nations are "ipso facto" parties to the Statute of the International Court of Justice.

Article 94, clause 1 and 2 establishes the duty of all UN members to comply with decisions of the Court involving them. If parties do not comply, the issue may be taken before the Security Council for enforcement action:

1. Each Member of the United Nations undertakes to comply with the decision of the International Court of Justice in any case to which it is a party.

2. If any party to a case fails to perform the obligations incumbent upon it under a judgment rendered by the Court, the other party may have recourse to the Security Council, which may, if it deems necessary, make recommendations or decide upon measures to be taken to give effect to the judgment.

Only states may be parties in contentious cases, on the other side individuals, corporations, parts of a federal state, NGOs, the UN organs and self-determination groups are excluded from direct participation in cases. The United States withdrew from compulsory jurisdiction in 1986, and so accepts the court's jurisdiction only on a case to case basis.

The International Criminal Law (ICL) deals with international crimes, the courts and tribunals are set up to arbitrate cases in which persons have incurred international criminal responsibility. It represents a significant departure from classical international law which was mainly considered law created by states for the benefit of states, but tended to ignore the individual as a subject of the law.

However, the precise parameters of this body of law are often unclear, perhaps due to the rapid and complex developments of our global society. In its widest context, the source of international criminal law might be derived from the general principles of international law recognized by civilized nations; and therefore, found in the customary law accepted by states, the general criminal law recognized by nations, and the treaties which govern particular conduct.

The International Criminal Court (ICC) is an independent, permanent court that tries persons accused of the most serious crimes of international concern, namely genocide, crimes against humanity, war crimes, and the crime of aggression, although it cannot currently exercise jurisdiction over the crime of aggression. Unlike the International Court of Justice, the ICC is legally and functionally independent from the United Nations. However, the Rome Statute grants certain powers to the United Nations Security Council.

Court came into being on 1 July, 2002 when the Rome Statute of the International Criminal Court entered into force, and it can only prosecute crimes committed on or after that date. The ICC only tries those accused of the gravest crimes. The ICC is joined by 108 countries; however, a number of states, including China, India, Israel, Iraq, Libya, Qatar, Yemen, and the United States are critical of the Court and have not joined. The Court is projected as a court of last resort, investigating and prosecuting only where national courts have failed.

During the negotiations that led to the Rome Statute, a large number of states argued that the Court should be allowed to exercise universal jurisdiction. However, this proposal was defeated due in large part to opposition from the United States. A compromise was reached, allowing the Court to exercise jurisdiction only under the following limited circumstances:

where the person accused of committing a crime is a national of a state party (or where the person's state has accepted the jurisdiction of the Court);

where a situation is referred to the Court by the UN Security Council.

FAILURES OF INTERNATIONAL LAW AND ITS LEGAL SYSTEM

It appears that the United Nations is doing all kind of things, but not the most important ones, like: uniting people, maintaining international peace and security, developing friendly relations between nations, among others.

Since the formation of the UN in 1945, almost every Charter of the UN has been breached. There have been approximately 182 wars around the world since 1945, including most recent South Ossetia War. Currently, in contemporary days there are 32 ongoing wars which are being fought, these include: Sri Lanka Civil War, Second Chechen War, War in Afghanistan, War in Darfur, Iraq War, War in Somalia, age-old Arab-Israel/Israel-Palestine (including al-Aqsa Intifada) conflict, among others.

In addition, the UN became a war combatant itself. There have been two major wars authorized by the Security Council; the 1950 Korean War, and the 1991 Gulf War. States that breach resolutions have different fates. The Korean War was the first war in which the UN participated. Iraq was swiftly attacked after failing to comply with a Security Council resolution by withdrawing from Kuwait.

However, the US, the United Kingdom, Russia, Indonesia, Morocco, Turkey, among others have been in breach of several resolutions, sometimes for decades, without having had any action taken against them.

The United States as a member state, permanent member of Security Council and founder of the UN was involved in over 100 international military conflicts since 1945, some of which were: Vietnam War, Korean War, Gulf War, and ongoing wars: Iraq War (Second Persian Gulf War), War in Somalia, War on Terrorism (Operation Enduring Freedom); Afghanistan, Philippines, Trans Sahara, among others. If we look through world history for the last fifty years, we can see that no country has been involved in as many military conflicts as the United States has.

Similarly, under the United Nations Charter, Charter I, ratified by the US and therefore binding on it, all the UN member states, including the US are prohibited from using force against fellow member states, except to defend against an imminent attack or pursuant to explicit Security Council authorization.

The UN and its Charters were established "to save succeeding generations from the scourge of war"; however, since its formation, around 38 million people lost their lives in various wars around the globe. Unfortunately, the final number of the war victims will never be known. The UN failed to maintain peace.