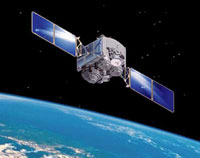 There are various other satellite powers, such as manipulating electronic instruments and appliances like alarms, electronic watches and clocks, a television, radio, smoke detector and the electrical system of an automobile. For example, the digital alarm on a watch, tiny though it is, can be set off by a satellite from hundreds of miles up in space. And the light bulb of a lamp can be burned out with the burst of a laser from a satellite. In addition, street lights and porch lights can be turned on and off at will by someone at the controls of a satellite, the means being an electromagnetic beam which reverses the light’s polarity. Or a lamp can be made to burn out in a burst of blue light when the switch is flicked. As with other satellite powers, it makes no difference if the light is under a roof or a ton of concrete--it can still be manipulated by a satellite laser. Types of satellite lasers include the free-electron laser, the x-ray laser, the neutral-particle-beam laser, the chemical-oxygen-iodine laser and the mid-infra-red advanced chemical laser.

Along with mind-reading, one of the most bizarre uses of a satellite is to physically assault someone. An electronic satellite beam--using far less energy than needed to blast nuclear missiles in flight--can “slap” or bludgeon someone on earth. A satellite beam can also be locked onto a human target, with the victim being unable to evade the menace by running around or driving around, and can cause harm through application of pressure on, for example, one’s head. How severe a beating can be administered from space is a matter of conjecture, but if the ability to actually murder someone this way has not yet been worked out, there can be no doubt that it will soon become a reality. There is no mention in satellite literature of a murder having been committed through the agency of a satellite, but the very possibility should make the world take note.

There is yet another macabre power possessed by some satellites: manipulating a person’s mind with an audio subliminal “message” (a sound too low for the ear to consciously detect but which affects the unconscious). In trying thereby to get a person to do what you want him to do, it does not matter if the target is asleep or awake. A message could be used to compel a person to say something you would like him to say, in a manner so spontaneous that noone would be able to realize the words were contrived by someone else; there is no limit to the range of ideas an unsuspecting person can be made to voice. The human target might be compelled to use an obscenity, or persons around the target might be compelled to say things that insult the target. A sleeping person, on the other hand, is more vulnerable and can be made to do something, rather than merely say something. An action compelled by an audio subliminal message could be to roll off the bed and fall onto the floor, or to get up and walk around in a trance. However, the sleeping person can only be made to engage in such an action for only a minute or so, it seems, since he usually wakes up by then and the “spell” wears. It should be noted here that although the “hypnotism” of a psychoanalyst is bogus, unconscious or subconscious manipulation of behavior is genuine. But the brevity of a subliminal spell effected by a satellite might be overcome by more research. “The psychiatric community,” reported Newsweek in 1994, “generally agrees that subliminal perception exists; a smaller fringe group believes it can be used to change the psyche.” A Russian doctor, Igor Smirnov, whom the magazine labeled a “subliminal Dr. Strangelove,” is one scientist studying the possibilities: “Using electroencephalographs, he measures brain waves, then uses computers to create a map of the subconscious and various human impulses, such as anger or the sex drive. Then. through taped subliminal messages, he claims to physically alter that landscape with the power of suggestion.” Combining this research with satellite technology--which has already been done in part--could give its masters the possibility for the perfect crime, since satellites operate with perfect discretion, perfect concealment. All these satellite powers can be abused with impunity. A satellite makes a “clean getaway,” as it were. Even if a given victim became aware of how a crime was effected, noone would believe him, and he would be powerless to defend himself or fight back.

And this indeed is the overriding evil of satellite technology. It is not just that the technology is unrestrained by public agencies; it is not just that it is entirely undemocratic. The menace of surveillance satellites is irresistible; it overwhelms its powerless victims. As writer Sandra Hochman foresaw near the beginning of the satellite age, though seriously underestimating the sophistication of the technology involved: “Omniscient and discrete, satellites peer down at us from their lofty orbit and keep watch every moment of our lives... From more than five-hundred miles above earth, a satellite can sight a tennis ball, photograph it, and send back to earth an image as clear as if it had been taken on the court at ground zero. Satellites photograph and record many things...and beam this information, this data, back to quiet places where it is used in ways we don’t know. Privacy has died.” This terror is in the here and now. It is not located in the mind of an eccentric scientist or futurologist. Satellite surveillance is currently being abused. Thousands of Americans are under satellite surveillance and have been stripped of their privacy. And presently they would have little or no recourse in their struggle against the iniquity, since technology advances well ahead of social institutions.

The powers of satellites, as here described, especially lend themselves to harassment of someone. The victim could be a business or political rival, an ex-spouse, a political dissident, a disliked competitor, or anyone who for whatever reason provokes hatred or contempt. Once the target is a “signature,” he can almost never escape a satellite’s probing eyes. (As an article in Science explained, “tiny computers...check the incoming signals with computerized images, or ‘signatures,’ of what the target should like.”) As long as his tormentor or tormentors--those with the resources to hire a satellite--desire, the victim will be subject to continuous scrutiny. His movements will be known, his conversations heard, his thoughts picked clean, and his whole life subjected to bogus moralizing, should his tormentor diabolically use the information gained. A sadist could harass his target with sound bites, or audio messages, directly broadcast into his room; with physical assault with a laser; with subliminal audio messages that disturb his sleep or manipulate persons around him into saying something that emotionally distresses him; with lasers that turn off street lights as he approaches them; with tampering with lamps so that they burn out when he hits the switch; and in general with the knowledge gained through the omniscient eyes and ears of satellites. In short, a person with access to satellite technology could make his victim’s life a living nightmare, a living hell.

How you could arrange to have someone subjected to satellite surveillance is secretive; it might even be a conspiracy. However, there seem to be two basic possibilities: surveillance by a government satellite or surveillance by a commercial satellite. According to an article in Time magazine from 1997, “commercial satellites are coming online that are eagle-eyed enough to spot you--and maybe a companion--in a hot tub.” The Journal of Defense & Diplomacy stated in 1985 that “the cost of remote sensors is within the reach of [any country] with an interest, and high-performance remote sensors (or the sensor products) are readily available. Advances in fourth-generation (and soon fifth-generation) computer capabilities, especially in terms of VHSIC (very-high-speed integrated circuits) and parallel processing, hold the key to rapid exploitation of space-derived data. Wideband, low-power data relay satellites are, at the same time, providing support for communication needs and for relay of remote sensor data, thus providing world-wide sensor coverage.” In addition, The New York Times reported in 1997 that “commercial spy satellites are about to let anyone with a credit card peer down from the heavens into the compounds of dictators or the back yards of neighbors with high fences.” “To date [the newspaper further noted] the Commerce Department has issued licenses to nine American companies, some with foreign partners, for 11 different classes of satellites, which have a range of reconnaissance powers.” But this last article discussed photographic reconnaissance, in which satellites took pictures of various sites on earth and ejected a capsule containing film to be recovered and processed, whereas the state of the art in satellite technology is imaging, detection of targets on earth in real time. Currently, industry is hard at work miniaturizing surveillance satellites in order to save money and be in a position to fill the heavens with more satellites.

It should be pointed out that although satellites are mentioned in this article with various forms of technology, the satellite is simply the most important component of space surveillance, but not the only component. Since actually a satellite is rather passive in that it reflects to a ground station on earth a beam of energy containing information; the giant mirrors and prisms of the satellite do the crucial reflecting, thereby uniting, in a manner of speaking, two points on earth, point A, the ground station, and point B, the unfortunate target. No satellite features an on-board EEG, Neurophone, brain-mapping device or other nefarious instruments. Instead, the satellite is a means of delivering information that, when received by a technician at a ground station on earth, can be used for mind reading, conversation monitoring, and so forth. Also, no satellite has ever read a person’s mind per se; that can only be done by a human being in the very special situation of access to the information downlinked to a satellite’s ground station. Thus, it should be clear that the satellite in space is only one link—although an inseparable one—in the technology of satellite surveillance.

Yet no source of information on satellites indicates whether the abuse of satellite surveillance is mediated by the government or corporations or both. More telling is the following disclosure by the author of Satellite Surveillance (1991): “Release of information about spy satellites would reveal that they have been used against U.S. citizens. While most of the public supports their use against the enemies of the U.S., most voters would probably change their attitudes towards reconnaissance satellites if they knew how extensive the spying has been. It’s better...that this explosive issue never surfaces.” Few people are aware of the destruction of the rights of some Americans through satellite surveillance, and fewer still have any inclination to oppose it, but unless we do, 1984 looms ever closer. “With the development of television and the technical device to receive and transmit on the same instrument, private life came to an end.”