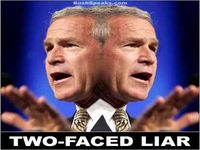 Having a man (and regime) such as George W. Bush (and his lobby) in charge was always going to be a risk, for here is a figure (and a big-business pressure group) who belongs to the rich clique of corporate elitists who basically do what they want and if they make a mistake, daddy and his cronies handle it. Such is the notion of the law they grow up with.

Law, for these people, is something to be manipulated, to be broken if necessary because they know that in the hands of well-paid professionals, the law can be turned on its head, whatever the crime, from a misdemeanour such as misbehaving at a baseball match or killing someone while drunk behind the wheel of a car. Daddy handles it.

Therefore it comes as no surprise to see George W. Bush flouting the international law one minute, by recognising the Serbian province of Kosovo as an independent state and then lecturing Russia on how to handle two cases which do have a claim to statehood, namely Abkhazia and South Ossetia. Take about double standards, talk about one two-faced confused son of his mother.

How much longer does Washington have to humiliate itself with this sort of charade? How can anyone in Washington be taken seriously if its President can look the camera in the eye and say with apparent conviction that Kosovo can be independent and Abkhazia and South Ossetia cannot?

The problem is, as we have seen, the manipulation campaign in the western corporate media backs up such absurd notions and packages them as fact. How many western European and north American readers belive that Iraq was all about 9/11 for instance? We even had Jeremy Thompson of Sky News asking the US troops while crawling up their backsides with a mock American accent (“Hi, you guys!”) if they were looking for revenge for September 11th when they entered Iraq.

We had Sky News (again) and other media outlets recently failing to report the Georgian Armed Forces’ act of slaughter of 2,000 Russians in South Ossetia, or even manipulating photos, trying to make the Georgian atrocities look like they were perpetrated by Russia.

Therefore at the moment, journalists in the free press (such as PRAVDA.Ru) have to work overtime setting right the barefaced lies presented as the truth by people like George Bush and the sycoiphantic minions which dare to call themselves an independent Press.

As regards Kosovo, it was the birthplace of the Serbian nation back in 1389. It was not the Serbs’ fault that every Albanian woman’s dream was to go there and breed like rabbits so that over time the population balance swung in favour of Albanians. It was not Serbia’s fault that the USA armed, aided and abetted the KLA terrorists to perpetrate atrocities against the Serb civilians to force Milosevic to put a stop to the international terrorism. (The USA then complains about Al Qaeda when it was doing exactly the same thing itself in the Balkans).

So Kosovo is not an independent state and it never will be unless Serbia decides so. Serbia is the only country that can pass judgement on the matter under international law, which respects the inviolability of frontiers. As the Russian Federation stated at the time, any new vector in international law which went against this principle would entail a new legal order, and this would have repercussions in places such as South Ossetia and Abkhazia.

International law cannot have double standards, or else it cannot be called law and the civilised world cannot be ruled by the law of the jungle, which is what Washington advocates. What Moscow advocates, and always has defended, is a multipolar world which respects the rule of international law, basing all crisis management situations on the UNO and its Security Council.

What Washington did in Iraq was to flout international law by attacking a sovereign nation based on barefaced lies, without the necessary second resolution needed under the UN Charter. What Washington did with regard to Kosovo was to draw a line on a map and to declare that a part of a sovereign nation was henceforth an independent (satellite) state. What Washington does in the case of Georgia is to ignore the 2.000 Russians murdered by Saakashvili’s forces (which are trained by the USA) and then to apply double standards, saying that Georgia’s territorial integrity is sacrosanct. What about Serbia’s? How can Washington think it can have it both ways?

And besides, what about Georgia’s obligation under the Soviet Constitution to hold referendums in Abkhazia and South Ossetia when Tblissi left the Union? Therefore it would appear that at the very least, these two Republics have more of a claim to independence than Kosovo, which under international law has none.

Unless of course the rest of the world recognises Alaska’s claim to independence, Texas as the Lone Ranger State, Aztlan in the southern states,Montana or the Dakota territories in the northern USA. And that would be the end of internationally recognised frontiers. Chaos. An Armageddon of micro-states and the end of the rule of law as we know it. Is this what Washington wants?

Therefore there cannot be two weights and measures as Washington advocates. It is time for a regime change in Washington, and the sooner, the better. It is time for someone in Washington to show some common sense, some respect for the law and due process and show the rest of the world that Washington can be a valuable and valued member of the community of nations.

Frankly there are many of us who yearn for the return of the prodigal son to the international fold.