Impeachment is Not Enough 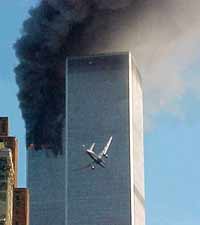 Impeachment is Not Enough

A preponderance of evidence shows that the highest officials of the Bush Administration, in collusion with many other officials from the Pentagon, CIA, FBI, FEMA, NSA, NORAD, New York City officials, air-traffic contollers, airline executives, controlled demolitions experts, computer graphics technicians, media executives, and others together planned and committed the horrible attacks of 9/11/2001 against the Pentagon and the Twin Towers of the World Trade Center in New York City. The 9/11 attacks were immediately blamed on some bogus 'Arab highjackers', a half dozen of whom were later confirmed to be still alive, and therefore innocent, after the 9/11 attacks.

The false-flag 9/11 attacks provided the excuse for the US government's 'War on Terrorism', the chief purpose of which is for the USA to gain control of the lucrative oil fields of the Middle East. A secondary purpose is to increase the taxation of US citizens for Defense spending in support of the USA's enormous Military/Industrial Complex, and a tertiary purpose is to establish justification of the enactment of Police State measures within the USA under the vast, far-reaching, and politically ambiguous umbrella of 'Homeland Security'. When the rights of freedom of speech and assembly are curtailed for the citizens of the USA, the US government will be able to pursue its agenda of world domination without the domestic distraction of dissident opinions, protests, and demonstrations.

The Pentagon, CIA, FBI, and other agencies and officials of the US government have perpetrated many crimes, assassinations, and false-flag bombings and attacks against US citizens and US interests during the past fifty years, including, but by no means limited to, the State political assassinations of John Fitzgerald Kennedy, Robert Fitzgerald Kennedy, and Martin Luther King; the 1988 Berlin Disco bombing; the 1993 World Trade Center bombing; the 1995 Oklahoma City bombing; and the anthrax letter attacks of October 2001. The US government and its allies also committed the Bali bombings of 2002 and 2005; the Madrid train bombings of 2004; the London 7/7/2005 bombings; and the recent spate of bombings in Ahmedabad, Jaipur, Bangalore, and at the Indian Embassy in Kabul during the summer of 2008.

Since the end of World War Two, fanatic right-wing ideologues with corporate connections have gradually gained complete control of the US military, the US intelligence agencies, the US government, and the USA's 'Mainstream Media'. Fascism in the USA is not merely a current threat posed by the Republican Administration of George W. Bush; it is an already-accomplished situation that has been many decades in the making. Fascism in the USA is actually a 'done deal'.

The USA's long descent into fascism cannot be halted or stopped merely by electing a member of the Democrat Party to the Presidency, or by electing a Democrat majority to Congress. The infiltration and control of the US government by right-wing extremists is far too advanced and complete -- they manipulate our elected officials like puppets on a string, and a great many of our elected officials are themselves part of the fascist establishment. The right-wing takeover of the US government has been a gradual and very successful fascist coup that will not be reversed without a very serious and deadly struggle. Given the history of extreme and indiscriminate violence shown by the ruling junta of the USA, it appears quite obvious to me that restoring democracy to the USA would inevitably require a violent armed Revolution in which the American people are opposed against the forces of the US government and the US military.

As a US citizen and as a human being, I personally consider the killing of innocent people in foreign countries by the CIA, the US military, and their puppets in support of the economic interests of multinational US-based corporations to be totally immoral and intolerable, and I consider it my solemn duty to oppose US aggression and Imperialism in any way that I can. US government and Mass Media propaganda promote a climate in which the actions and activities of US troops abroad are regarded as beyond reproach, but there is nothing noble or 'heroic' about unprovoked military aggression and genocide against vulnerable and innocent foreign populations.

George W. Bush, George H. Bush, Jeb, Neil, and Marvin Bush, Dick Cheney, Donald Rumsfeld, Condaleezza Rice, Karl Rove, Wolfowitz, Perle, Powell, Armitage, Ashcroft, Abrams, Adelman, Feith, Bolton, Libby, Kissinger, Mueller, Tenet, Goss, Giuliani, Hayden, Chertoff, Baker, and many hundreds of other individuals working for the White House, CIA, FBI, FEMA, the Pentagon, NSA, NORAD, the airline industry, and the US news media together planned and executed the 9/11 attacks. All of the above-named and their accomplices need to be tried for Treason and Mass Murder, with the death penalty as the just and very necessary reward for their conviction of those crimes.

We need a Nuremberg-style trial for Treason and Mass Murder for all of the members of the US government, the US military, the US intelligence agencies, and their civilian accomplices in the airline industry and the news media who participated in the murderous crimes of 9/11. The death penalty should be applied to all of the principals and their accomplices, even if that means executing several hundred or even several thousand people, because crimes of this magnitude against the American people and the US Republic cannot go unpunished, and the punishment must be extreme to send a message that the American people will not tolerate such Treason -- not now or in the future. If allowed to remain unpunished and at liberty, these individuals represent a grave threat to the safety and security of all Americans. If convicted of the heinous crimes of 9/11, the death penalty is the only way to ensure that they or their allies will not somehow manage to attack America and Americans again. The executions should be performed in public and be internationally televized for the entire world to witness.

I do realize that there are some very worthy reasons to oppose capital punishment in many situations. However, it is also quite apparent to me that any show of clemency that might be given to the US government perpetrators of the 9/11 attacks leaves open the possibility that they and their sympathizers could revive their subversion of American democracy and their violence toward peace-loving Americans. That is why I advocate a policy of capital punishment without any consideration of mercy, plea-bargaining, or probation for the US government perpetrators of the 9/11 attacks and their allies.

No one in or out of the US government should be exempt from prosecution and capital punishment for the Treasonous attacks of 9/11. The planners and participants in the 9/11 attacks within the US government and their accomplices must not be allowed to protect themselves behind the specious excuse of "National Security." The true security and survival of our Republic depends entirely on this.