Has the US Secretary of State got her cassette stuck? For a week now she has been reiterating the same phrase “Russian forces must leave Georgia now” and for a week now the world has been informed of Georgian war crimes against Russians in Ossetia. The war crimes happened, the Russians call the shots now, Ms. Rice. Like it or lump it. 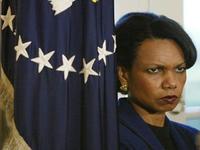 Is Condoleeza Rice stupid? OK her boss is, we all know that and that’s why nobody pays any attention to what he says or if they do, it is to have a good laugh at how such an imbecile could supposedly rule the roost in Washington (when everyone knows it is Cheney and his energy and arms lobbies). So Bush gets a discount, like the uncle that farts at family dinners, like the retarded nephew who belches swearwords after his third litre of Coke, like the simpleton that sits outside the church on Sundays begging for money informing everyone that he is an astronaut on Thursday afternoons.

Is Condoleeza Rice stupid? She claims to be a Russian expert but her command of the language was recently exposed as being basic/elementary level on a Russian radio programme, just as her grasp of what is going on in Russia today seems beneath the informed blogger level.

Is Condoleeza Rice stupid? How can this female purport to broker events between an evil regime in Tblisi supported by her own evil regime in Washington, and Russia, while not mentioning one single time the war crimes committed by Georgia against Russian peacekeepers and civilians?

So we come to the conclusion that she is either stupid, or incompetent, or downright evil. If she didn’t know about Georgia’s war crimes, when everyone else did, she is incompetent (as she proved as National Security Advisor during 9/11). If she knows about the war crimes and fails to mention them, as Secretary of State, she is plain stupid and if she purposefully covers them up, maybe because her own armed forces were involved, then she is one evil piece of work, as many of us suspected all along.

Is Condoleeza Rice stupid? Or incompetent? Or just plain evil?