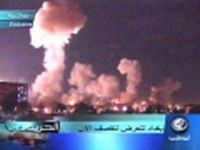 So you have the colossal audacity, Mr. Bush, to “warn” Russia to pull back? As the wanton, perverse war criminal under whose watch the world saw the crime known as “shock and awe” committed, I’d say you were well out of your mind to suggest that Russia should pull back.

What’s a little shock and awe among inferior people we want to rob and destroy, eh?

What do human beings need an infrastructure for?

What’s a little regime change? Don’t recall when that was a goal of yours?

What’s wrong with destroying an environment for 4 billion years and generations after generations of people? After all, they’re just rag heads, aren’t they Mr. Bush?

Perhaps when Russia even begins to match your tremendous feats of glory can you speak about pulling back you fool of the worst kind.

You can also tell your number two man to shut up. Cheney said "Russian aggression must not go unanswered, and that its continuation would have serious consequences for its relations with the United States."

How about your missile shield breathing down the neck of the Russian nation? There to protect Europe from Iran? The most totally absurd thing that only a moron would believe.

How about your deliberate breaking of your agreements regarding Serbian Kosovo? UN Resolution 1244 which your country agreed to, is the ink dry…you deliberately went against it and recognized Kosovo in total disregard and in violation of that agreement.

And you expect your words to be heeded or even listened to? You are joking! It is said when Caligula went mad he heard laughing.

Do you hear people laughing at you Mr. Bush?

Listening to you, your Vice President, Condi Rice and US and western officials complain about "regime change," "invasion," "bloodshed" and "suffering civilians" (in the light of their crimes across the world) have become nothing but laughable at best and highly infuriating and enraging at worst.

You are an idiot!

We seem to recall that when your Israeli friends were absolutely devastating the people of Lebanon, wantonly killing civilians, destroying their country’s infrastructure and destroying their environment also….the flapping jaw of your representative, Condoleezza Rice and your entire administration were saying no ceasefire, no nothing, just keep on going, keep on committing acts of state terrorism on innocent people, keep on committing your war crimes, you have them covered.

Well, Mr. Bush, this is it. Moscow better get this one right: No limited engagement nonsense. Moscow has the moral and legal right to carry out full scale military operations within Ossetia, Abkhazia and Georgia to ensure the safety of its citizens, to ensure the protection of Abkhazians and Ossetians and to finally destroy NATO plans for the Caucasus region.

No sane, informed, honest, rational person can blame Russia for reacting to a genocide against their own citizens in Georgia. But then you are NONE of those things.

The problem is not what Russia is doing, but how the US is reacting to it. If you were sane, if you were informed, if you were honest, if you were rational, if you were even marginally fair, you should be happy to see Russian forces put an end to the killing of Russian citizens by the Georgian military. But no, your government is advised by lunatics who belong in psychiatric wards instead of the Pentagon and White House. And you, Mr. Bush, belong in an international criminal court to be judged for your crimes against peace and your crimes against humanity.

15:05
German Chancellor Scholz grins to question of security guarantees for Ukraine
13:46
Russia tells UN for how long special operation in Ukraine will last
20:00
USA bans Russian gold
19:56
USA sanctions Russian defence officials and TV presenter
18:00
Poland: 'Enemy' is too beautiful a word, but we should not call Russia so
17:03
Macron refuses to declare Russia a sponsor of terrorism at the Zelensky's request
15:25
Ukraine uses HIMARS systems for the first time
14:38
Russia expands the "black list" of Americans
14:23
Wirtualna Polska: Warsaw to shift responsibility to Gazprom for stopping gas supplies
13:44
CNN: The US doubts Ukraine's ability to return lost territories
Americas
USA unveils plan for post-Putin Russia to collapse into smaller states

Hotspots and Incidents
Ukraine uses HIMARS systems for the first time
13:46
Russia tells UN for how long special operation in Ukraine will last
20:00
USA bans Russian gold
19:56
USA sanctions Russian defence officials and TV presenter
18:56
Expert names the two reasons why Zelensky wants to end the conflict before winter
18:46
USA unveils plan for post-Putin Russia to collapse into smaller states
18:11
Russia published images of the decision-making centres in the US and Europe
18:00
Poland: 'Enemy' is too beautiful a word, but we should not call Russia so
17:03
Macron refuses to declare Russia a sponsor of terrorism at the Zelensky's request
15:30
Israeli expert reveals when the Ukrainian military in Donbass will be defeated
15:25
Ukraine uses HIMARS systems for the first time
РусскийDeutschFrançaisPortuguese