The Pennsylvania debate was broadcast on ABC a little over a week before the Pennsylvania primary election. The first question from debate moderator Charles Gibson was whether each would pledge to choose the other as a running mate — a proposal of former New York governor Mario Cuomo. 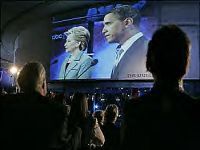 Neither responded initially, a rather uneasy silence all around, until Obama finally broke the silence and said the issue was "premature." Clinton finally replied that each was determined to make sure a Democrat was inaugurated as President next January — whoever won the nomination.

If the debate had to be summed up in one phrase, it would be “mud on her face.” For weeks, Senator Hillary Clinton has been degrading her opponent and saying he is too inexperienced to be President, he isn’t electable, he is all talk, even insisting that John McCain is the better choice since experience is the most important thing for a President.

Clinton has been caught lying on several issues already, but on the night of the debate, she was backed into a corner by moderator George Stephanopoulos when the debate took on the question of the November general election and the importance of a Democrat being put in the White House. It took two answers — and a nudging from Mr. Stephanopoulos — before Mrs. Clinton answered whether she believed Senator Obama could win.

At first she praised McCain as a formidable opponent and "a man with a great American story to tell." Pressed to answer directly whether Obama can win, she responded: "Yes. Yes. Yes." But she added: "I think I can do a better job."

Then Clinton did an about face and disingenuously pressed the "bitter" statement and other issues, raising questions about Obama's electability. "These are problems and they raise questions in people's minds," later saying they go to "a larger set of concerns about how do we run against John McCain," the probable Republican nominee.

Clinton was reminded of being caught stating on several occasions that she had dodged sniper fire on a visit to Bosnia in 1996. The context for the question was a new Washington Post-ABC News poll showing that nearly six in 10 Americans do not find her honest or trustworthy.

"On a couple of occasions in the last couple of weeks, I just said some things that were not in keeping with what I knew to be the case and what I had written about in my book, and you know, I am embarrassed by it, I have apologized for it, I have said it was a mistake," said Senator Clinton. "And it is something, I hope, you can look over.”

The candidates spent nearly half of the debate with moderators continually grilling Obama (as he is the clear front runner) with the numerous spurious allegations that have been fodder for journalists and pundits for the past few weeks and especially for the increasingly desperate Clinton camp.

Obama once again answered questions about controversial statements by his former pastor and his own comments that some rural Pennsylvanians are "bitter." He was also questioned about wearing an American flag lapel pin and his association with Bill Ayers, a Chicago supporter who was a member of the Weatherman Underground and is now a professor at the University of Illinois in Chicago.

Mrs. Clinton seemed determined to push the question of Mr. Ayers, citing details of Mr. Obama’s association with him as a fellow board member for the Woods Fund of Chicago. Mr. Obama, was well prepared, and responded by noting that Bill Clinton, when he was President, had pardoned the sentences of two other members of the Weather Underground.

“By Senator Clinton’s own vetting standards, I don’t think she would make it, since President Clinton pardoned or commuted the sentences of two members of the Weather Underground, which I think is a slightly more significant act than me serving on a board with somebody for actions he did 40 years ago when I was only 8 years old,” he said.

Senator Obama pointed out Clinton’s continued negativity and needing to resort to politics-as-usual attacks, despite her transparent efforts to assure one and all of the priority of electing a Democrat to take the White House in November. "You take one person's statement if it's not properly phrased and you just beat it to death, and that's what Senator Clinton has done the last several days," he said. "But I do think it's important to recognize it's not helping that person who's sitting at the kitchen table, trying to figure out how to pay the bills at the end of the month."

"During the course of the last few days, she has said I am an elitist, out of touch, condescending," said Senator Obama. "Let me be absolutely clear, it would be pretty hard for me to be condescending towards people of faith because I am a person of faith, and have done more than most other campaigns in reach out specifically to people of faith."

Obama was also able to point out that his record of unifying voters would make him the better Democratic nominee. "There is no doubt that the Republicans will attack either of us," he said. "What I have been able to display during the course of this primary is that I can take a punch. I have taken some pretty good ones from Senator Clinton."

Senator Obama took Clinton by surprise when he recalled Mrs. Clinton’s dismissive statement in 1992 about not wanting to spend her life at home baking cookies, an attempt to counter her attacks on his recent statements about religion and small-town values — Mr. Obama chose not to go after his rival aggressively, even when he was asked whether voters considered her honest.

George Stephanopoulos, when interviewed the next morning, pretty much indicated that Hillary Clinton didn’t perform that well. He also indicated that several Pennsylvania Democrats appear to be prepared to switch sides from Clinton to Obama because she is seen as too negative.

The day after the debate, in Raleigh, North Carolina, Senator Obama went on the offensive: "Last night we set a new record. It took us 45 minutes . . . before we heard about health care. Forty-five minutes before we heard about Iraq. Forty-five minutes before we heard about jobs. That's how Washington is…I have to say Senator Clinton looked in her element … She was taking every opportunity to get a dig in there. That’s her right. That’s her right to kind of twist the knife a little bit … that’s why she’s only airing negative attacks on TV in Pennsylvania like most places. I understand that because that’s the textbook Washington game.”

The final word will be on Tuesday, April 22nd, when Pennsylvanians vote in the primary. Clinton will need a huge win to remain a viable contender for the nomination. She has shown herself to be an inveterate liar and a bully of the worst variety, so she will need all the luck she can get. The corporate elitist media, pretending she walks on water and largely ignoring her myriad of false claims and inconsistencies, will no longer be able to prop her up.