Kosovo fails all tests for nationhood

As we ponder how to confront the newly-created but phony terrorist Islamic Republic of Kosovo's illegal independence, we must first understand exactly why this is such a ridiculous action. 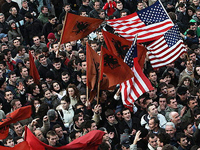 Kosovo fails all tests for nationhood

Some of the first tests for nationhood include: 1. treatment of minorities and respect for law and meting ofjustice, 2. respect for the property of citizens, 3. economic viability, 4. UN recognition and finally, 5.can the nation defend itself? On all accounts, Kosovo fails miserably.

Regarding the first test: for the past 60 years, Kosovo's non-Albanian residents have suffered horribly from extremist Albanians with thousands slaughtered, hundreds of thousands ethnically-cleansed, and over 150 Serbian Orthodox Churches and Monasteries destroyed. NATO, the self-proclaimed "peacekeeper" of the Serbian province has done next to nothing to prevent the "Krystal nacht" endured by Serbs, Gypsies, and other non-Albanians. The current leaders of Kosovo are war criminals sought by Serbia and Islamic terrorists supported by Osama Bin Laden and other extremists are flourishing there with no fear of justice.

Regarding test 2: The Serbian Orthodox Church owns much of the land upon which Kosovo is situated. Thus far, there have been no success in efforts to return this land to its rightful owner. Thousands of Kosovo Serbian homes have been torched with next to zero chance that the Serbs will ever return.

Considering test 3: Kosovo has a roughly 50% unemployment rate with the highest birthrate in Europe and a thriving economy based on drug running, terrorist-training, and the sex-slave trade.

For test 4, the UN will never recognize Kosovo as Russia realizes that the primary reasons to steal Kosovo from Serbia pertain to maintaining an indefinite NATO military presence in the Serbian province (Camp Bondsteel) to act against a resurgent Russia. A popular saying among many Eastern Europeans is: "Today Serbia, tomorrow Russia." Given the shameful and dishonorable way that the West has behaved since it illegally destroyed the former Yugoslavia, Russians should be very concerned. You can't appease evil.

Finally, for test 5, the Kosovo Liberation Army never succeeded against the Serbian army except when it has NATO as it's airforce mercilessly bombing civilians in 1999 in NATO's vicious and illegal war against the Serbian people. Kosovo will never survive as an independent state without a foreign army protecting it. Given that our needless war in Iraq is bleeding our nation dry, I shudder to think how much our folly in Kosovo will end up costing us in the ensuing decades.

The US and the EU are creating a very dangerous precedent by illegally creating a "Greater Albania" that will irreversibly damage relations with Russia and encourage some 200 separatist movements the worldover. The US has lost the "moral" authority to act as self-appointed "policeman" of the world. Just as the Nazi occupation of the Sudentenland from Czechoslovakia was the precursor to WWII, the Western theft of Kosovo may provoke WWIII. It's time for Russia to draw a line in the sand.