The three parties that were central to Ukraine's Orange Revolution on Thursday signed a protocol aimed at advancing the process of forming a coalition government and ending a long wrangle after last month's parliamentary elections. 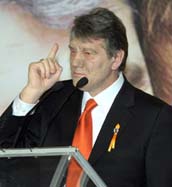 However, more talks will be needed before the Our Ukraine, Bloc Tymoshenko and Socialist parties formally agree to a coalition. The parties comprise politicians who supported the 2004 "Orange Revolution" demonstrations that helped bring President Viktor Yushchenko to power, but who later divided amid squabbles and maneuvering.

A reunion of the former Orange Revolution allies would keep Ukraine on its pro-Western course, but could further alienate the country's east and south, which leans toward Russia.

The party that got the most votes in the March 26 elections is led by Viktor Yanukovych, who ran against Yushchenko in the fraud-plagued 2004 elections that sparked the Orange Revolution. However, that party fell short of getting a majority of seats in the Verkhovna Rada, the country's parliament.

Yushchenko had not excluded the possibility of trying to form a coalition of Our Ukraine and Yanukovych's Party of Regions.

But Yulia Tymoshenko, the former prime minister who heads the party bearing her name, insisted that Thursday's signing of the document meant the coalition would exclude Yanukovych's party.

"The coalition consists of three and only three forces, and that's all there is to it," Tymoshenko told reporters. "This document begins all the procedures regarding the formation of the coalition ... I am happy this took place."

The most contentious question apparently remaining to be resolved in forming an "Orange" coalition is that of Tymoshenko's role. She intensely wants to return to the prime minister's post, which she held for several months after Yushchenko's election but from which she was fired last fall.

Roman Bezsmertny, a senior Our Ukraine official who signed the document on behalf of his party, was cautious about the document, saying more work was still needed.

"A serious discussion still lies ahead about the main theses of the coalition, but we are convinced it will be successful," he said, reports AP.