President Viktor Yushchenko's party on Wednesday notched up the pressure on its leader to reunite the estranged Orange Team, passing a resolution that put potential deal-breaking restrictions on the pro-Moscow opposition leader. State Security Council chief Anatoliy Kinakh said that any parliamentary coalition members must agree to confirm Ukraine 's pro-Western course, reject the possibility of adopting Russian as a second state language and turn down any calls to transfer significant central government powers to the regions. 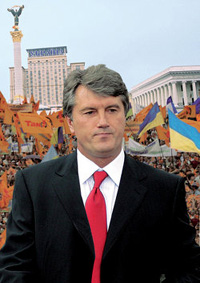 "The priority for us is and will be Ukraine's foreign policy course toward European and Euroatlatnic integration, while maintaining good-neighborly relations with Russia and other countries," said Foreign Minister Borys Tarasiuk, according to a party statement. But in a sign that the party was still reluctant to fully embrace former Prime Minister Yulia Tymoshenko, who has demanded her old job back, the statement declared: "We think today it is correct to talk not about assigning jobs but about developing our country."

Yushchenko held separate consultations Tuesday with Yanukovych and Tymoshenko as the parties maneuvered over the formation of a possible majority coalition in parliament. If the Yushchenko and Tymoshenko can overcome their bitter falling-out, their parties' combined votes would put their total above Yanukovych's and give them a chance to rule together. For Yushchenko, though, such a deal would be dangerous as well as unpalatable. Tymoshenko's ambitions make her a threat to the president, who has seen his own sky-high popularity plummet amid public outrage over the slow pace of reforms.

Viktor Yanukovych, whose pro-Moscow Party of the Regions attracted the most votes in Sunday's parliamentary election, supports European Union membership, but he had also pushed for making Russian a second state language. Members of his party, which has its support base in the east, had been leading the call for making Ukraine a federal republic. Yanukovych's party has said that it will dictate the makeup of the future coalition, adding that it is too early to begin talks until the final results are known.

The Central Election Commission's lengthy vote count continued Wednesday, with some 93.5 of the votes counted. Yanukovych's party had 31.3 percent, followed by Tymoshenko's bloc with 22.4 percent and Yushchenko's Our Ukraine with 14 percent. While the statement from Our Ukraine ups the pressure on Yushchenko, it is the president who will ultimately make the decision.

His presidency is not at risk, but his electoral defeat has left him weakened. Under constitutional reforms, Yushchenko accepted during the tense days of the 2004 protests, the president's power to pick his prime minister and much of the Cabinet passes to parliament, leaving Yushchenko at risk of isolation.

Tymoshenko has argued that only a revived Orange Team can keep Yanukovych out and safeguard the reformist, pro-Western ideals championed in 2004. But while the Orange parties won more votes combined, it remains unclear whether they will be able to overcome deep personal animosity and forge a coalition after months of trading insults, reports the AP.