The National Interest has wondered how Russia and China might annihilate the US aircraft carriers. Author of the article believes that aircraft carriers are the main combat vessels of the country's Navy. 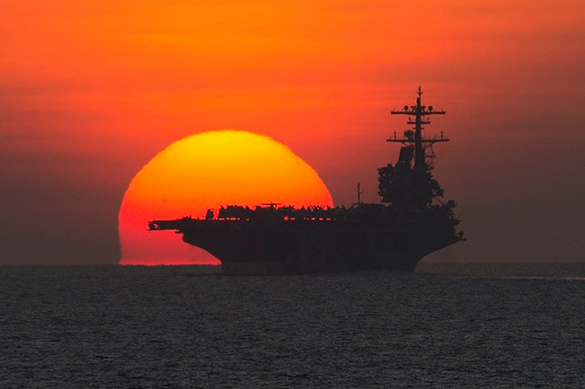 The first way is torpedoes. The journalist has given an example of annihilation of a huge Japanese Shinano aircraft carrier in 1944. Today, the US aircraft carriers are vulnerable to torpedoes as well. While the 'Russian and Chinese submarines regularly exercise attacks on the US carrier groups'.

The second way is cruise missiles, various types of which are in service in Russia and China. However, the author notes that there is no modern data on appliance of cruise missiles against huge state-of-the-art aircraft carriers. Nonetheless, they surely can destroy a vessel.

But the most important technological achievement for the latest decade in combating aircraft carriers have turned out to be anti-ship ballistic missiles. The Chinese Dong-Feng 21 used to scare the US that much, that the Pentagon has got down to development of its own means of missile defence. However, the question is whether they will manage to withstand the missiles.

The next two ways are 'sinking' the American equipment, so-to-say from inside. The author says about strange policy of Donald Trump, who speaks about increase of expenditures on defence, and tries to economize at the same time. While aircraft carries, ships and other equipment need huge amount of money. That is, the US ships may be drowned with growing expenditures.

And the fifth way is an abstract one. That is excessive caution of the Americans. According to the author, in case of a conflict, the US Admirals and the President may get afraid of the aircraft carrier's vulnerability to such extent, that they would decide to refrain from their aggressive and decisive appliance. Huge cost of the aircraft carriers turned out to be their main drawback. They are too expensive to lose them, and that is why they may be left in the dust of a highly intensive conflict with a match, the author is sure.

As Pravda.Ru reported before, the US Marine Captain Joshua Waddell criticized the US authorities' policy on defence and claimed that the Russian army was more effective under a lesser budget. He noted that the US spent huge sums of money on defence, but they disappeared. An expensive M1A1 tank could be destroyed with a projectile worth 20 dollars, while an aircraft carrier, which cost billions of dollars, could be drowned with missile shelling, Waddell pointed out.

The US army also does not have enough money for maintenance of equipment, which has to be out of action. It has become known recently that 60% of the US fighters cannot fly. The case is about F/A-18E and F/A-18F Super Hornet carrier-capable fighters.