The leader of France's National Front and presidential candidate Marine Le Pen paid a visit to the Trump Tower, where she was to have a meeting with Donald Trump, Reuters reports. 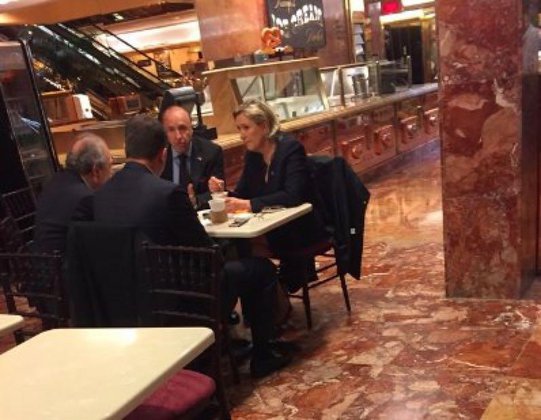 Marine Le Pen is paying an unofficial visit to New York less than four months before the elections in the country, Bloomberg reports.

However, the head of her election headquarters, David Rachline, specified that Marine Le Pen was  paying a private visit to the United States and did not intend to have a meeting with US President-elect Donald Trump.

"It is not on the agenda, we do not discuss private visits," Rachline said.

The US President-elect has never met with Le Pen before, but there are people in his team, who support her. In particular, Trump's Senior Advisor and Breitbart's former chief editor Steve Bannon would often make flatteringly remarks about Marine Le Pen.

Some suggest that Marine Le Pen may request a loan from Donald Trump for her election campaign. She currently has fundraising problems, while French banks refuse to finance "such a radical politician."

According to recent polls, Marine Le Pen's rating is now higher than that of her rival, former prime minister and center-right activist Francois Fillon.

Marine Le Pen stated before that if she ever takes office as President, France would pull out from NATO. "NATO was created at the time of the threat from the Warsaw Pact and the communist expansion of the Soviet Union. The USSR no longer exists, nor does the Warsaw Pact.  Washington supports the existence of NATO to serve its purposes in Europe," Marine Le Pen said.

She also expressed her respect for Russian President Vladimir Putin and US President-elect Donald Trump.

The French will go to the polls to elect their new president on April 23. A second round of elections may take place on May 7. Le Pen may win the elections in the first round with about 26.5 percent of votes.