Poroshenko speaks about threat of open war with Russia

Ukrainian President Petro Poroshenko said after a meeting with German Chancellor Angela Merkel that the threat of an open war with Russia in Ukraine was  higher than last year. 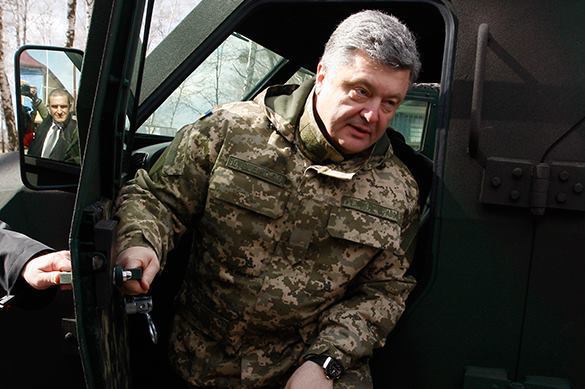 Poroshenko said in an interview with German publication Bild that the Russian authorities were not complying with the Minsk Accord. He also accused Russia of building up a contingent of Russian soldiers on the territory of Ukraine. The Russian authorities have repeatedly stated that there were no Russian troops in Ukraine.

Poroshenko also pointed out that Russia continued building new bases and conducting military drills on the border. "Russia has been investing heavily in preparations for war, and we do not receive any explanations about that," he said.

According to the Ukrainian President, Ukraine needs to receive arms from Germany to defend the country.

On January 11, Bild published an interview with Russian President Vladimir Putin. During the interview with the German publication, Putin touched upon the subject of Ukraine. Putin called the 2014 Maidan events in Ukraine a "coup d'etat." According to Putin, the coup brought nationalist forces to power in Ukraine and they started threatening people. "We used armed forces only to contain more than 20,000 Ukrainian troops from interfering in the expression of the free will of the people residing there," Putin said explaining the events in the Crimea, RBC reports.

Noteworthy, Bild has the reputation of a tabloid publication, but it still remains the most widely read newspaper in Germany.