15:24
Chinese yuan leaves US dollar behind on Moscow Exchange
15:10
US secretly supplies AGM-88 HARM anti-radar missiles to Ukraine
13:29
Nuclear disaster in Ukraine will affect even Turkey
19:48
Ukraine makes serious preparations to attack Crimea
19:01
Expert: Russia deals an irreparable blow to Ukraine and the United States
18:36
NetEase: Putin's reaction to blocking Russia's gold reserves came as a surprise to the US
17:31
Global TImes: US chess game can drag the world into abyss
16:39
Turkey decides to restore diplomatic relations with Israel
16:30
American Conservative reminds Ukraine of the Battle of Kursk's unlearned lesson 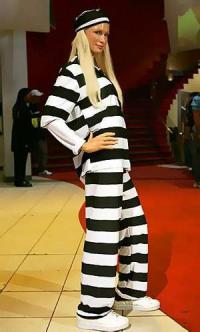 It is possible that jailers will not miss Paris Hilton for long- she probably will return to prison. Just hours after she was sent home under house arrest for an undisclosed medical condition, the judge who put her in jail for violating her reckless-driving probation ordered her into court to decide if she should go back behind bars.

"My understanding is she will be brought in in a sheriff's vehicle from her home," Parachini said Thursday.

The celebrity inmate was sent home from the Los Angeles County jail's Lynwood lockup shortly after 2 a.m. in a stunning reduction to her original 45-day sentence. She had reported to jail Sunday night after attending the MTV Movie Awards in a strapless designer dress.

She was ordered to finish her sentence under house arrest, meaning she could not leave her four-bedroom, three-bath home in the Hollywood Hills until next month.

City Attorney Rocky Delgadillo complained that he learned of her release the same way as almost everyone else - through news reports.

Then, late Thursday, he filed a petition questioning whether Sheriff Lee Baca should be held in contempt of court for releasing Hilton - and demanding that she be held in custody. Superior Court Judge Michael T. Sauer's decision to haul Hilton back to the courtroom came shortly after.

Sauer himself had expressed his unhappiness with Hilton's release before Delgadillo asked him to return her to court. When he sentenced Hilton to jail last month, he ruled specifically that she could not serve her sentence at home under electronic monitoring.

Delgadillo's office indicated that it would argue that the Sheriff's Department violated Sauer's May 4 sentencing order.

Baca defended the decision to release Hilton, saying it was based on medical advice.

"It isn't wise to keep a person in jail with her problem over an extended period of time and let the problem get worse," he told the Los Angeles Times on Thursday, declining to specify Hilton's condition.

"My message to those who don't like celebrities is that punishing celebrities more than the average American is not justice," Baca said.

As word spread earlier Thursday that the 26-year-old poster child for bad celebrity behavior was back home, radio helicopter pilots who normally report on traffic conditions were dispatched tohover over her house and describe it to morning commuters. Paparazzi photographers on the ground quickly assembled outside its gates.

Hilton herself kept a low profile, although late in the morning a man arrived outside her house with a supply of cupcakes he said she had instructed him to distribute to the media horde.

Her parents also arrived and briefly entered, then left, the home.

Shortly before noon, Hilton issued a statement through her attorney.

"I want to thank the Los Angeles County Sheriff's Department and staff of the Century Regional Detention Center for treating me fairly and professionally," she said. "I am going to serve the remaining 40 days of my sentence. I have learned a great deal from this ordeal and hope that others have learned from my mistakes."

Attorneys differed on whether her treatment was unusual.

"She would have gotten out early if she was plain Jane," said Leonard Levine, who has handled numerous probation violation cases. He noted that overcrowding in the Los Angeles County jail system has led to thousands of nonviolent offenders serving only 10 percent of their sentences. "She did as much time as a normal person would have done."

Loyola University law professor Laurie Levenson said that she suspected the deal for Hilton's early release was in the works even before she entered the jail system - and that officials probably were anxious to get her out of their custody.

"The time and resources needed to take care of a Paris Hilton are huge," she said. "They have to make sure she is safe and her medical needs are attended to. Everything they did was going to be looked at under a microscope."

Levine said that with rewards being offered for pictures of Hilton in custody, jail officials would have had to monitor the cell phone cameras of every employee.

Rene Seidel of the Los Angeles County Department of Health Services said he had "never heard of" an inmate being released from jail for a medical condition.

Inmates with a cold are sent to a jail clinic, he said, and the seriously ill go to the jail ward of the Los Angeles County-USC Medical Center.

Hilton's path to jail began Sept. 7, when she failed a sobriety test after police saw her weaving down a Hollywood street in her Mercedes-Benz on what she said was a late-night run to a hamburger stand.

She pleaded no contest to reckless driving and was sentenced to 36 months' probation, alcohol education and $1,500 (EUR1,100) in fines.