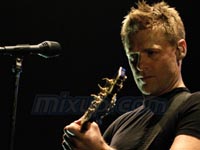 Organizers put the number of people who had turned up for the free concert Monday night at half a million.

Joel, playing in front of a Colosseum lit up with purple and yellow lights, performed old favorites like "New York State of Mind," "Honesty" and "Just the Way You Are."

Giant screens were set up along Via dei Fori Imperiali, the large boulevard that leads to the Colosseum and is lined with ancient Roman relics, for the throngs of people who could not see the stage, according to the AP.