In Ukraine, bloggers discuss the new "rejuvenated" look of Yulia Tymoshenko, the leader of Fatherland Party. Many assume that Tymoshenko has fallen a victim to plastic surgery. 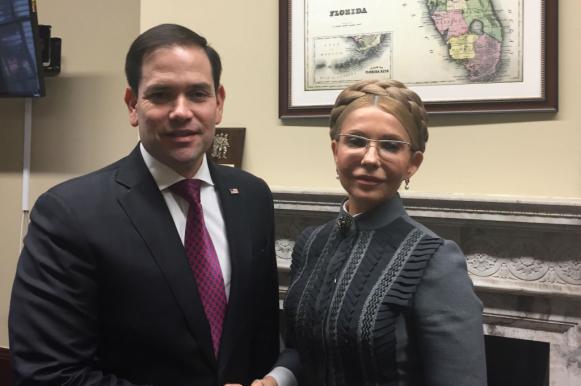 The discussions sparked after the publication of Tymoshenko's photos made during her recent visit to the United States, where she held a number of meetings with influential officials. In particular, Tymoshenko discussed corruption in Ukraine with assistant to the US Secretary of State for European and Eurasian Affairs, Wess Mitchell. Yulia Tymoshenko also met Special Representative of the US Department of State for Ukraine Kurt Volker, with whom she discussed prospects for the settlement of the conflict in the Donbass and the possibility of deploying a UN peacekeeping mission to the region.

Tymoshenko, the Ukrainian ex-prime minister, also had a meeting with a high-ranking member of the Republican Party of the United States, Senator Marco Rubio, to discuss questions of the complicated social and economic situation in Ukraine.

The photos of the 57-year-old Ukrainian politician generated many questions on social media. Many wondered whether it was Yulia Tymoshenko on the photos indeed, because she did not look like herself.