Yulia Tymoshenko, the Prime Minister of Ukraine, also known as the “Orange Princess,” created a furore on Wednesday. Tymoshenko appeared at a governmental meeting with a new hairstyle. She removed her trademark braid for which she was recognized all over the world. 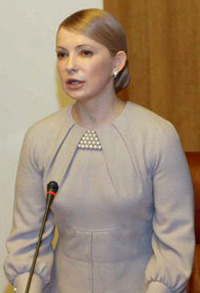 Ukrainian ministers were startled to see a neat bun at the back of Tymoshenko’s head instead of the “wheel” as local wits joked. The new hairstyle made the whole nation wonder why Tymoshenko decided to abandon the symbol of her national affiliation. Some others would like to know if she had the famous braid insured. Several Ukrainian insurance companies previously offered her to insure the braid against possible infringements from third parties (apparently political opponents), fires and hair loss.

It seems that Tymoshenko does not treasure her personal treasure. She made a public appearance in 2007 with her hair unfastened and promised the deputies of the Ukrainian Parliament to change her hairstyles regularly.

Evil tongues immediately said that Tymoshenko’s new image was a token of imminent changes in the whole country. Locals say that if Tymoshenko lets her hair down, it means that she is working on a union with former Prime Minister Viktor Yanukovich. The story had a sad ending in 2007, when the Ukrainian Parliament was dissolved as a result of such a union.

Others say that Yulia Tymoshenko had her wages halved because of the crisis. She now reportedly receives 11,000 hryvnas, which makes her Louis Vuitton outfits and expensive stylists unaffordable. All she can do now is make a small bun at the back of her head.

The most trustworthy theory says that Tymoshenko is sick and tired of jokes about her braided hairstyle. Many Russian tabloids referred to Tymoshenko as “the cake with ears.” The Ukrainian prime minister changed the color of her hair too.