Beckham Fined $1,000 for Confronting Own Fans

Football star David Beckham has been slapped with a 1,000 dollar fine for provoking his own team's fans during the Galaxy's 2-2 draw with AC Milan at the Home Depot Center. Major League Soccer commissioner Don Garber fined the Los Angeles Galaxy 's midfielder for his part in an ugly halftime scene where he allegedly challenged abusive Los Angeles fans to come down onto the field, reports AFP. 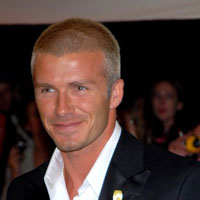 Beckham Fined ,000 for Confronting Own Fans

MLS commissioner Don Garber fined Beckham for confronting a members of the L.A. Riot Squad, a group of hardcore Los Angeles Galaxy fans that booed Beckham through much of last Sunday's match against AC Milan at the Home Depot Center.

At halftime of the match, the former England captain walked over to the group and challenged jeering fans to meet him on the field. Beckham then attempted to jump over a advertising barrier toward the crowd. He was held back by security personnel, which also restrained an angry fan who left his seat and rushed towards Beckham. Police arrested the fan who left the stands, CNN reports.

"We support our players interacting with fans, whether it is at clinics, charity events or by high-fiving their supporters in the stands while celebrating a goal," MLS commissioner Don Garber said in a statement. "However, our players should never engage in conduct that can be interpreted as encouraging fans to come out of the stands and onto the field, regardless of the reason."

Beckham wasn't thrilled with his less-than-friendly reception during his first home game since returning from his loan spell at AC Milan, telling CNN "you can't be liked by everybody" after the confrontation.