Some "senior moments" forgetfulness could be Alzheimer's

A study found that in a disturbing number of cases, embarrassing "senior moments" such as forgetting a recent conversation or drawing a blank on someone's name may really be a sign of Alzheimer's after all. 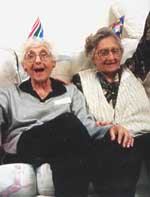 Some "senior moments" forgetfulness could be Alzheimer's

Chicago scientists reached that conclusion after autopsies on the brains of 134 older people who had appeared to be mentally normal, apart from some subtle forgetfulness.

Occasional forgetfulness is often written off as a normal part of growing old and nothing to get alarmed about. And in most cases, that is probably true.

But the scientists found to their surprise that the brains of more than one-third of the participants were riddled with waxy protein clumps and other signs of degeneration that are hallmarks of Alzheimer's disease.

The study "questions the acceptability of minor episodic memory loss in older adults as normal," said Dr. Carol Lippa, director of the memory disorders program at Drexel University College of Medicine in Philadelphia. She had no part in the study.

The study appears in Tuesday's issue of Neurology, the American Academy of Neurology's scientific journal.

Dallas Anderson, an Alzheimer's scientist at the National Institute on Aging, which funded the research, called the results "very plausible and hopeful." Anderson noted that scientists are trying to pinpoint the earliest point in the Alzheimer's disease process, which could lead to earlier treatments.

Participants in the study had amounts of brain deterioration similar to those found in Alzheimer's patients who were severely debilitated by the mind-robbing disease before their deaths. The researchers said that raises the question of why some afflicted people but not others can function normally.

"There's something about these people that allows them to have large amounts of pathology without obvious memory problems," said lead author Dr. David Bennett, an Alzheimer's researcher at Rush University Medical Center. "We need to understand why that is."

His theory, supported by earlier research, is that high levels of education and feelings of social connectedness can help preserve brain function. Bennett said he believes that helps create a "neural reserve" that enables people to tolerate Alzheimer's-induced brain deterioration without showing signs of dementia.

Some researchers believe that mentally stimulating tasks such as doing crossword puzzles, taking classes or reading can help prevent Alzheimer's. But Bennett said his new findings suggest that in some people, these tasks might also enable the brain to compensate for the disease, reports AP.