A U.S sailor aboard the USS Kitty Hawk has been taken into custody by U.S. naval authorities in Japan over the suspected murder of a Japanese woman. The suspect, whose name has been withheld, had admitted his involvement in the death of 56-year-old Yoshie Sato, a resident of Yokosuka, the Mainichi Shimbun reported Thursday. Japanese investigators from Yokosuka Police Station said the serviceman entered the gate of the U.S. naval base in Yokosuka with blood on his clothes on the morning of Jan. 3, the same morning Sato was found collapsed at the entrance of a building in the city. U.S. military officials had reportedly questioned him over his appearance. 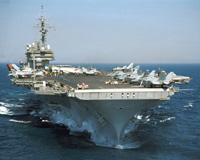 Based on security camera footage, officials said there was a possibility that several U.S. servicemen were involved. Sato left her home at about 6 a.m. on Jan. 3, and appeared to have been attacked while on her way to work. Her cause of death was loss of blood due to ruptured organs. Police said her clothes appeared to have been tampered with. Notes had apparently been removed from her purse, which was found in a parking lot at the rear of the building.

Japan's Kyodo news agency reported that a U.S. sailor had confessed to killing Yoshie Sato, 56, on January 3 in Yokosuka City, where the USS Kitty Hawk aircraft carrier is based, and that the sailor had been taken into custody by U.S. Naval authorities.

The incident comes at a delicate time as Japan and the United States seek to win agreement from local Japanese communities to plans to reorganize U.S. bases as part of Washington's global effort to transform its military into a more flexible force.

"I sincerely regret and am deeply saddened by this absolutely abhorrent incident and promise our complete cooperation with all authorities, particularly those in Yokosuka," Rear Admiral James Kelly, Commander U.S. Naval Forces, said in a statement.