Afghanistan may demand war compensation from Russia for the former Soviet Union's invasion of the country in 1979 when over 100,000 Soviet troops invaded Afghanistan and occupied the country till Feb.15, 1989. The war claimed lives of thousands of Soviet and more than a million of  Afghan people. When the Soviet Union left the country, the Taliban regime, supported that time by the USA, took the power. After the 9/11 attacks the USA threw over ultra orthodox Talibs, and a new president Hamid Karzai came into power. 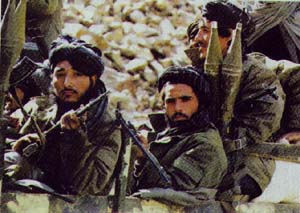 "The government of Afghanistan is mulling over the issue," Presidential spokesman Mohammad Karim Rahimi told a questionnaire while his opinion was sought with regard to demanding war compensation from Moscow.

Such a statement sounds quite paradoxical in the light of the recent friendly statements made by Afghan President Hamid Karzai at the first session of Afghan National Assembly. Last week Hamid Karzai called for improvement of bilateral relations between Afghanistan and Russia.

Speaking about international relations with neighboring countries such as Pakistan, India, China, Uzbekistan and Turkmenistan, the president said that Afghanistan stands for improvement of bilateral and friendly relations with the Russian Federation and hopes that Russia will help greatly in the reconstruction of the country.

The poor central Asian state plunged into civil war following the withdrawal of the Red Army and experienced brutal factional fighting as well as Taliban's hard-line rule till the regime's removal by the U.S.-led war in 2001, Xinhua reports.

Thousands of Afghans have been maimed or killed by landmines strewn in the hundreds of thousands across Afghanistan by Soviet troops fighting the Mujahideen rebels.

This is not the first time that the compensation issue has been raised in Afghanistan, but the government has yet to formally submit a request to Moscow.