All 23 people on board the An-140 airliner were killed when the plane crashed on the Caspian Sea coast, not far from the city of Baku, Azerbaijan. The crash killed 18 passengers and five members of the crew. Rescuers are currently looking for flight recorders to investigate the reasons of the plane crash. 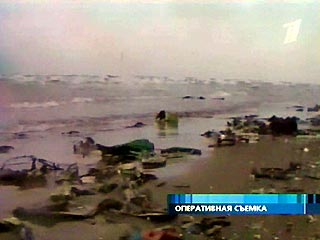 Fragments of the An-140 plane were found some 40 kilometers far from Baku. “The fragments were found scattered not far from one of the settlements,” an officer of the Azeri transport police said.

The jetliner, bound to the city of Aktau, Kazakhstan, took off from the Baku airport at 9:19 p.m. Friday and went off radar screens 20 minutes later, a source with the transport police administration of Azerbaijan said.

The crashed plane belonged to AZAL airline – Azerbaijan Airlines. The passengers on board the plane came from six countries: ten people from Azerbaijan, four from Kazakhstan, as well as one Australian, one British, one Georgian and one Turkish passenger. The five crewmembers killed in the crash held Azeri citizenship.

The police do not think that the plane crashed because of a terrorist act, a source with the Office of the Prosecutor General of Azerbaijan said. News agencies reported previously that the way the fragments of the plane were found on the ground suggests the aircraft exploded when flying.

The President of Azerbaijan Ilkham Aliyev has visited the site of the air crash. Aliyev ordered to set up a state committee to investigate the reasons of the crash.