The jetliner may have been struck by lightining

A flaming jetliner plunged in flames onto the tarmac at port Harcourt airport, Nigeria, killing 103 people, all but seven of those on board. There was no official confirmation of the cause of the crash, but witnesses and officials said it had overshot the runway during an electrical storm and may have been struck by lightning. 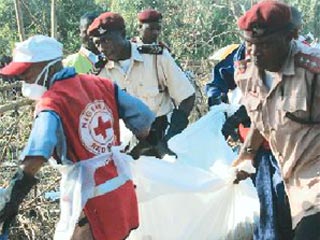 An official at Port Harcourt airport, who asked not to be named, said that a large number of those who were killed were young students returning home for the Christmas holidays.

The flight had arrived from the federal capital Abuja and was landing in Port Harcourt, the main centre of Nigeria's oil industry and a base for many international companies. There was no immediate confirmation of any foreign nationals among the casualties.

A police spokesperson said that 57 bodies had been recovered and that the seven casualties had been taken to hospital. An executive with an international security consultancy with staff at the airport said: "What we are hearing is that the plane was struck by lightning about 40 or 50 metres from touching down. The fuel in the wing caught fire and it exploded," he added.

The crash was Nigeria's second airplane accident in seven weeks raising questions about air safety in Africa's most populous nation. "It is a national tragedy for us," Obasanjo spokesman Femi Fani-Kayode said. "We need to take all the necessary measures to make sure this sort of thing stops happening."

An airport worker said burned bodies lay across the landing area after the plane broke into pieces. "The place where I'm standing now is scattered with corpses," the worker said on condition of anonymity because he was not authorized to speak to the media.

Frantic family members at the airport said the plane was carrying 75 pupils heading home from Abuja for Christmas. The pupils, students at the Loyola Jesuit School, were between 12 and 16 years old.

Nigerian-owned Sosoliso Airlines was established in 1994. It began scheduled flights as a domestic airline in July 2000 and now flies to six Nigerian cities, according to its Web site.

Information Minister Frank Nweke said Sosoliso had a reputation for being efficient and reliable. "To my knowledge they haven't had any incidents since they started their operation," Nweke said. "So this has come as a surprise, a very big surprise."