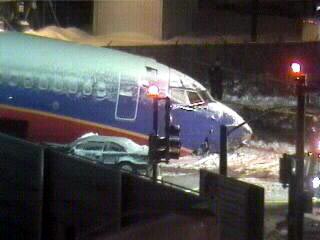 A terrible accident took place at Chicago airport, when a jetliner slid off a runway when landing in heavy snowfall. The Boeing 737 plane crashed through the boundary fence and whooshed into a busy street. The aircraft hit one vehicle on the road and pinned another one beneath it. A child sitting in one of the vehicles was killed in the accident.

Two passengers on the Boeing 737 suffered minor injuries, and eight people in the two vehicles struck outside Midway International Airport were hurt in the incident, authorities said.

Click here to see the photo report of the accident

The child, a six-year-old boy, was dead on arrival at the hospital, spokeswoman Deborah Song said. Two adults and two other children were at the hospital, their conditions ranging from serious to good, she said. The airport was closed after the incident, and it is unclear when it will reopen, Abrams said.

Ninety passengers were on board, according to the Federal Aviation Administration's regional office in Chicago. "It got really bumpy, and then a big crashing sound," passenger Katie Duda said. The next thing she knew, she said, the airplane was past the airport and in the street. "Everyone was very calm. Everyone around me seemed very OK," she said.

She said the passengers used inflatable slides to get out of the plane in the blowing snow. The airplane's nose was crushed and a severely damaged engine was on the ground, Chicago Fire Department spokesman Larry Langford said.

The accident happened about 7:15 p.m. (0115 GMT) when Southwest Flight 1248 inbound from Baltimore slid off the runway, crashed through the airport's boundary fence and stopped on part of a nearby street, according to the Federal Aviation Administration's regional office in Chicago. At least two vehicles were damaged, and one was pinned under the plane, the AP said.