A woman residing in the city of Voronezh was infected with HIV, when she received a transfusion of donor blood in a local maternity hospital on Tuesday this week. Preliminary investigation revealed that the infected donor blood was delivered to the hospital from a regional blood transfusion center in May of the current year. The donor has been identified: a 35-year-old woman donated blood at least five times. 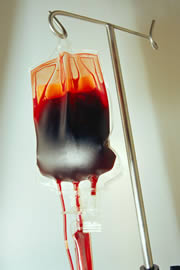 The blood from the HIV-positive individual was transfused to seven residents of Voronezh, spokesman for the regional Healthcare Department, Mikhail Ivanov said. The official added that seven individuals, who received blood transfusion from the infected donor, were examined. HIV tests showed negative results.

The virus was found in the blood of one woman: she was infected with HIV after childbirth.

It became known yesterday that the number of patients, who received infected blood from the HIV-positive donor, could reach 208. Mikhail Chubirko, the Surgeon General of the Voronezh region, said that 208 individuals received doses of albumin – medication made of HIV-positive blood. Local medics found 70 of those patients, who would have their blood tested for HIV in near future.

A special committee for healthcare of the Voronezh regional administration did not confirm the information about 208 incidents of HIV infection, though.

The incidents with HIV infection won scandalous reputation for the city of Voronezh during only three days. It was the first time, when a young woman was infected with HIV through donor blood.

”The qualities of the Human Immunodeficiency Virus are still unknown. The virus can reveal itself in six months, in a year or even in ten years. This is probably the reason why specialists failed to find the virus in the donor's blood,” senior doctor of the regional anti-AIDS center, Tatiana Mamchik said.

The Office of the Public Prosecutor of the Voronezh region instituted criminal proceedings on the fact of the patient's infection with HIV. The victim has not filed a police report. A person guilty of the crime may face up to five years of prison term (if this person is identified during investigation).

In the meantime, Russian media outlets report that the HIV-infected blood has been illegally delivered to Moscow. Specialists say that the medications, produced on the base of HIV-positive blood plasma have been delivered to Russia's capital and supposedly sold in retail networks.

”Commercial firms purchase donor blood in regions and subsequently sell it in big cities. One does not have to mention the black market of medicines that devours everything,” the director of the blood center of the Federal Biological Agency of the Russian Healthcare Ministry, Yevgeny Zhiburt said.