Harbin, the second largest city in China, has been virtually under siege for a few days

On Wednesday this week the Chinese authorities confirmed that the Sungari River had been polluted with dangerous chemicals. Poisonous substances got into the river due to powerful explosions at a chemical plant that took place on November 13th. The Sungari flows into the Amur River. 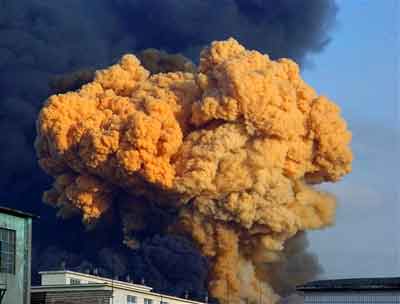 Harbin, one of China's largest cities, has been affected by the river pollution. The incident cut off the city's water supply. Nearly 10 million of Harbin residents are now suffering from the water shortages. Ecologists say poison in the drinking water can cause leukemia.

Harbin, the second largest city in China, has been virtually under siege for a few days now. It is impossible to buy any bottled water, milk, nor even beer in the city. The stores ran out of stock after the residents went wild and emptied the shelves following the reports about contamination of the Sungari River that flows through the city. Panic seized the people when the water taps ran dry. The authorities initially said that the water supply system had been shut down for overhaul. But a real reason came to light soon anyway.

See the photo gallery of the chemical explosion here

As it turned out, the water in the river was polluted with dangerous chemicals on November 13th due to an industrial accident in one of the largest chemical plants in the city of Girin located up the river. A benzene production plant was destroyed by the blast that claimed the lives of 7 people. More than 10 thousand people were evacuated. There was a huge blowout of chemical substances into the air. Poisonous benzene was one of the many chemicals that were set free by the explosion. In line with a longstanding tradition, the Chinese leadership has tried to cover up the incident. The journalists were given a minimum of information related to the event. However, just a few people doubted that a toxic cloud would settle down on the water of the Sungari flowing several hundred meters away from the plant. And the fears became a reality.

The city hall of Harbin promptly responded to the reports about contamination of the water supply system. Orders were issued to ban operations at the public bathhouses, laundries, and carwashes. The authorities said earlier that the water supply system had been shut down for a minimum period of 4 days. Today's statement indicates that the shutdown period could last longer than expected. The city schools will remain closed from November 23rd to November 30th. Sixteen thousand tons of bottled water has been urgently delivered to Harbin. However, the city dwellers are rather skeptical about the measures taken by the authorities. Foreign tourists as well as local residents are hastily leaving the area.

Meanwhile, a large-scale loss of fish in the Sungari has been already reported. A Beijing daily published a photograph of thousands of dead fishes lying along the river bank. The toxic substances can get into the Russian territory via the Sungari that flows into the Amur. Traces of chemicals were found in the water samples taken a mere 200 kilometers away from the Amur. Ecologists estimate that polluted waters could reach the Khabarovsk area at the days of November or at the beginning of December. The above factors may cause an environmental disaster in the Russian Far East. A special commission for the prevention of water pollution has convened in Khabarovsk.