A brutal killing of a family couple, university professors, has recently taken place in the Russian city of Kaliningrad. The bodies of the killed man and woman were found in their apartment. 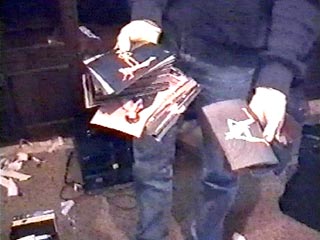 The Kaliningrad PD told Interfax that the crime took place two weeks ago, although the bodies were found only today. Forensic experts concluded that the two people had been killed with a blunt object.

While searching the apartment of the killed university professors, the police found numerous tapes of home-made pornographic videos. In addition, the officers found film-making equipment and manuals, as well as a collection of cards with students' photographs and addresses.

A similar incident took place in Russia's Ekaterinburg two years ago. The local police detected and destroyed a whole network of studios making pornographic materials for Internet users. The chain of five studios equipped with up-to-date computers and webcams was operating in Ekaterinburg from October 2001 to December 2002. Clients could select a girl from several pictures and establish an online connection with her. As a result of a special operation, the police withdrew 20 computers, 15 webcams and a large number of sex toys. It turned out later that the project had been organized by two young men and a 54-year-old professor from one of Ekaterinburg's high schools.

Thirty-eight young women from 17 to 30 years of age, presumably female students, were detained during the operation. All of them confessed that they had posed for explicit photographs and participated in online sex sessions, one minute of which cost almost $2 for male clients living in the USA and Europe. The girls were paid up to 15 percent from each of the paid minute.

Scientists and professors may commit a whole variety of crimes, like all other criminals. A professor of a Moscow university was sentenced to 12 months in jail in 2002 for profligate actions against his own daughter. Investigators found out that the man was trying to convince his six-year-old daughter that sexual relations between father and daughter were absolutely normal. The child molester was caught red-handed incidentally, when the girl was already 12 years of age. The man's wife filed for divorce immediately. The father was begging the judge to let his daughter live with him. The girl told her story in the courtroom in detail: she adored her father and did not even realize that he had committed a sex crime. When psychologists cleared up the situation for the girl, she developed a strong feeling of hatred against her lecherous father.