A young Russian skinhead pleaded guilty to killing 37 people. Artur Ryno, 18, was arrested in April together with his friend Pavel Skachevski, 18, for killing an Armenian . Afterwards, the teenager told the police that he and his friend had brutally killed dozens of innocent people. 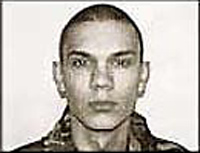 When Artur Ryno, a student at Moscow icon painting school, told the police the details of his executions and cleanups they did not believe him at first. They thought that he was slandering himself. However, the investigation confirmed some of his testimony . If the police find the evidence of other crimes the case may develop into an international scandal, because it will be possible to interpret it as massive murder of individuals representing national minorities in Russia, Vremya Novostei reports.

Ryno and Skachevski were arrested on April 17 after the killing of Karen Abramian, a businessman from Armenia. The criminals tried to flee from the scene; but witnesses saw them boarding a tram. The witness reported the tram’s number to the police who then chased the tram and detained the two young men. Police officers said that the criminals’ clothes were covered with blood stains.

Investigators say that Artur described many details of his crimes that he had committed. His friend Pavel Skachevski denies responsibility, saying that he has never attacked anybody.

When being questioned for the first time the two young men refused to plead guilty to the murder of the businessman from Armenia. Afterwards, investigators showed them a videotape filmed by surveillance camera installed above the door of the house where the victim lived. The faces of the criminals were clearly seen on the tape. Artur Ryno started talking. He told the police about the murder of the Armenian man and then proceeded to another crime that he had committed shortly before that. As a result, the young man pleaded guilty to killing 37 people.

Artur explained his actions with hatred that he said he was nurturing towards people from southern regions of Russia, so-called Caucasians.

The teenagers committed the crimes in different parts of Moscow. They would go to dormitory suburbs at night time and simply wait for a victim. There were days when their waiting returned no results, although on other occasions they could attack two or more individuals. Artur said that there were witnesses in many of his crimes, although nobody tried to stop them.