About 2,500 Russians suffer from severe food poisoning every year

A Muscovite, who bought a pack of rye crackers to his beer, found a dried body of a baby rat inside the pack

It seems that massive food poisoning has become a sad part of everyday reality in Russia. News programs continue reporting serious food poisoning incidents, in which dozens and even hundreds of people suffer. The latest once of them happened last week in Russia, when over 600 people traveling in a train from Russia's south to Moscow were poisoned with bad quality food. Over a hundred passengers, most of them children, still remain hospitalized. Preliminary investigation showed that all those people had eaten pieces of a large 50-kilo cake, which apparently became the reason of such a massive poisoning. 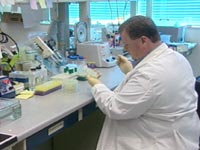 There are a lot of other examples like that. About 100 cadets of the Stavropol Military Institute found themselves on hospital beds after they had had dinner in the dining hall of the institute. Over 30 schoolchildren from the republic of Chuvashia in Central Russia were poisoned with bad-quality sausages in the middle of October. Fifty residents of one of the settlements in the Amur region of Russia, 48 of them schoolchildren, suffered from low quality food on October 21. All these incidents happened in Russia in October only.

According to the federal service for control of consumers' rights, about 2,500 Russian people suffered from various types of poisoning in 2004. Russian Surgeon General, Gennady Onischenko, said that the majority of incidents took place because of low-quality foodstuffs. The turnover of such food has increased in Russia: these products basically include tinned food, as well as butter, vegetable oil, tea and coffee, which appeared on the market illegally.

It is worthy of note that illegally-made alcohol beverages poison up to 40,000 Russians ever year. The quality of imported food leaves much to be desired too. Valery Fraganov, the chairman of the State Duma committee for economic policy, business and tourism, said that developed countries perceive Russia as a market, to which they can deliver second-best products.

The federal service to supervise consumers' rights rejected over 600 tons of foodstuffs last years as a result of numerous inspections. A lot of specialists believe that the number could be a lot higher if specialists approached the inspections more meticulously. To make matters worse, the number of inspectors involved in such procedures has been decreasing in Russia lately.

A Muscovite, who bought a pack of rye crackers to have them with a bottle of beer, was shocked when he opened the pack and saw a dried little rat inside. This news has received an extensive coverage in Russia recently. Experts investigated the incident and came to conclusion that the dead body of the baby rat had been heat-treated together with other ingredients used for the crackers. “The baby rat was cooked with other products used in the making of this beer snack. We noticed various spices on the body of the animal,” an experts said. The man and two of his friends, who bought those rye crackers, were lucky to avoid severe problems with digestion: they decided to sue the makers of the snack.

A small beer factory in the Tver region of central Russia supposedly infected hundreds of regional residents with hepatitis in the summer of the current year. The company's guilt has not been established yet, although it is curious how the management tried to defend their business. The commercial manager of the company said that specialists found dysentery organisms in their products, not hepatitis-provoking bacteria. One shall assume that the managers did not even treat dysentery as a dangerous disease.