European Union turns a blind eye on chaos in France

With street fires flaming for ten nights in a row, the French government may institute curfew

Massive riots, pogroms and arsons, which have been shaking the once-stable life in France after the death of two teenagers of Arab origin, may continue in other countries of Western Europe. 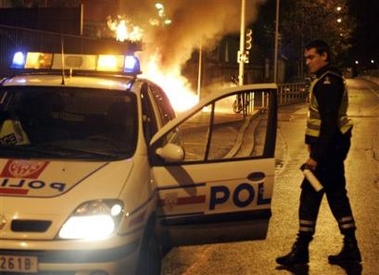 The recent events in Germany prove that such an opportunity is quite possible. Six cars were reportedly burnt yesterday in several immigrant-populated areas of Bremen. For the time being it is not known if the Bremen incidents have anything in common with the recent events in France. However, German authorities fear that the French example may inspire local immigrants too. Wolfgang Bosbach, a deputy of the German Bundestag from the Christian Democratic Union, stated yesterday that Germany could easily become the target for immigrants' gangs in spite of social and cultural differences between the two countries.

The warning from Great Britain was much more emotional. The chairman of the British Commission for Racial Equality, Trevor Phillips, stated that the riots in France showed that the problem of integration required a political solution. It's hardly surprising that when they do something that seems shocking, which breaks into the headlines for a few hours that we all say 'Oh my God, how did this happen?'" Phillips said.

The European Union has not shown any official reaction to the current events in France, which have already brought millions of euros of damages for one of the central economic systems of the EU.

The subject of pogroms will most likely be included on the agenda of the forthcoming meeting of EU's foreign affairs ministers (25 ministers are holding the meeting to resume the talks about the European budget for 2007-2015). The problem of immigration is one of the most sensitive issues for such influential EU members as France, Germany, Great Britain, Italy, Spain and the Netherlands. It is not ruled out that the ongoing mess in France will result in a special meeting devoted to this subject.

There has been no serious problem or accident in France, to which French President Jacques Chirac would show absolutely no reaction. However, the head of France produced quite a surprise when he released no comments or statements after ten nights of pogroms and fires in various parts of the country. The scale and geography of Paris riots has been growing in spite of numerous arrests and toughened security measures. The leftist opposition has accused the French government of inaction and urged the French Interior Affairs Minister Nicolas Sarkozy to resign.

It is worthy of note that this politician will become the central figure of a series of political events, which are going to happen in France during the forthcoming days. Nicolas Sarkozy, the head of the French Interior Affairs Ministry, the leader of the pro-presidential party, is both Chirac's sworn enemy and the most popular rightist politician in France. Sarkozy's chances at the 2007 presidential election look quite promising.

Sarkozy used to be a member of the Jacques Chirac's team, but was later expelled from the president's milieu when he took the side of Jacques Chirac's political adversary in 1995. The results of an opinion poll conducted by TNS-Sofres before the start of the pogroms show that only 39 percent of French citizens trust the 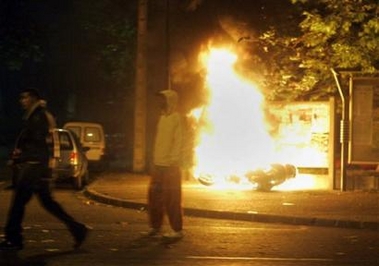 The current unrest in France will obviously affect the nation's key political figures. Therefore, any statements and actions, which may follow from President Chirac, will influence the positions of his potential successor de Villepin and his prime adversary, Nicolas Sarkozy. However, the French president will obviously put forward his view of the country's future against the background of pogroms and fires in the near future.

The population of France currently counts 60.6 million people. Ethnic minorities make about eight percent (some five million people) of the country's population: Arabs natives of Algeria, Morocco, Tunis and Africans from the former French colonies of the Black Continent.