The unexpected tornado, which tore through the USA's two central states of Kentucky and Indiana, killed at least 22 and injured over 230 people. Most of the deaths occurred in a mobile home park in Indiana's Vanderburgh county, where 17 people were killed.

The twister appeared at about 2 a.m. Sunday. The towns of Evansville and Newburgh suffered most from the surprising strike of raging winds. Evansville is Indiana's third-largest city, with a population of 121,582, according to the 2000 U.S. Census. Warning sirens sounded only ten minutes before the tornado's arrival: the majority of local residents were sleeping and did not hear the howling of the siren.

Click here to see the photo gallery of the tornado's destruction

Rescuers who had been on the scene overnight reported seeing children wandering the area looking for their parents and parents scouring the site for missing children.

Children's bicycles and other toys were strewn amid other debris. Yesterday's tornado became the deadliest twister in Indiana since April 3, 1974, when an outbreak of several tornadoes killed 47 people and destroyed 2,069 homes, specialists say. 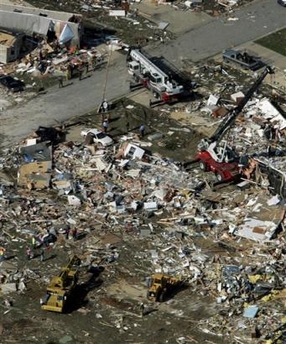 Twelve people are in critical condition at St. Mary's Hospital in Evansville after suffering storm-related injuries, said Jeff Jones, a hospital spokesman. He described the most common injuries as "penetrating"' wounds to the chest and head. Another 26 of the total 150 people treated for tornado- related injuries are in serious condition, county Sheriff Marvin Heilman said.

Search and rescue teams are combing through the rubble, Smith said, including 34 members of Indiana Task Force One, a group of officers organized by the U.S. Federal Emergency Management Association and specially trained in rescue and recovery techniques. The group employs dogs capable of locating survivors or human remains in ruins. The group is just back from Louisiana, where it helped in search and recovery efforts there following Hurricane Katrina, Smith said.