Hostility towards immigrants sparks off riots

The riots in France are a lamentable phenomenon which will gain the immigrant communities few friends and which will provide welcome fuel for those who sponsor rectrictive policies on immigration in Fortress Europa. They are also a direct consequence of the pin-headed, narrow-minded and Fascist policies of French Interior Minister Nicolas Sarkozy.

Police harassment of and disrespect for immigrant communities has seen 40 cities go up in mass rioting by second and third generation immigrants, an explosion caused by poor living conditions, high unemployment, economic difficulty and worse still, an absence of hope for the future. 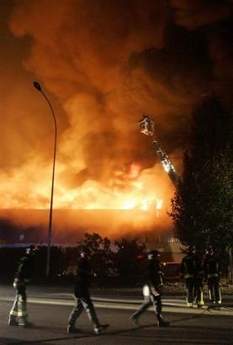 The plight of France's immigrant community is the plight of millions of other people living in Europe, labelled because they hold a passport which states they were born in the right or wrong place.

A student born in Ceuta, Morocco, can go to attend a conference in Canada without a visa. A student born 100 metres outside Ceuta, in Morocco, cannot – he needs to apply for a visa from the nearest Canadian Embassy. If he lives in Portugal, this is in Paris. He will have to send his passport and 50 Euros and will have to wait for the visa to be sent by mail. If he receives notice of the conference too near to the date, he cannot go. Why? Because he was born the wrong side of a line, curiously enough drawn by Europeans on territory which is not European.

Europeans thought nothing of going to Africa, colonising it, murdering millions, torturing, dividing families by selling people off into slavery, never to be seen again by their children, pilfering the resources and then leaving nations wholly divided and unprepared for self-government.

Europeans thought nothing of placing their henchmen in power and by buying their confidence, fostering corruption which ensured the channels of production remained one-way – into Europe. Europeans then thought nothing of inviting immigrants in to do the menial jobs. What was not done, as it never had been before, was to enact sensible policies of integration.

Going into immigrant estates and calling people “scum”, which is what certain members of Sarkozy's French police have been doing, is not a sensible policy of integration. It is an abrasive act of intolerance which is bound to constitute the action which sparks a reaction.

While European societies fail to integrate the second and third generation people of immigrant origin (and it is important to say that these people are not immigrants, but children of immigrants), the tinder will be there for fires to burn.

A sensible integration policy would require a special attention from the education system to ensure that the children of immigrants get the same start in life as their peers from non-immigrant families. Given equal opportunities, people evolve equally.

Yet there remains a strong current of opinion in Europe and in the European governing circles, which is xenophobic. Immigrants are seen as a nuisance and not a necessary asset for the future of Europe's economies. While this notion persists, restrictive policies will continue to be practised and these backfire automatically, as we see in France today.

The rioting, however understandable it is, is also an unacceptable way to react. It fuels the fires of mindless morons such as Le Pen and does nothing to create bridges, much needed in European society today.