Massive disorders in several suburbs of Paris populated with natives of North Africa have been going on for several days already. Violence started when residents of Arab quarters accused policemen of the death of two teenagers that were trying to run away from law-enforcement officers. The situation demonstrates the complexity of relations between the native French population and immigrants from former colonies, the number of which has been growing in France during the recent several years. 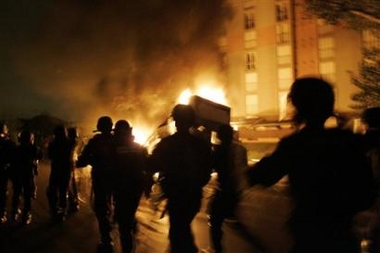 The history of such conflicts started in the 19th century, when France seized vast territories in Africa and Asia and turned them into its colonies. A lot of Algerians, Moroccans, Senegalese and residents of other colonies took an active part in the battles conducted by the French Army. Many of those people became full-fledged French citizens afterwards, in the 1920s. In addition, some colonial citizens were given a right to work in French cities, although they were not allowed to take their family members along.

Practically all colonies obtained independence after the end of WWII. Algeria became a sovereign state in 1962, eight years after the war. Nevertheless, the inflow of immigrants from colonies to France was growing anyway: it was partly caused with the demographic crisis, which started in the country and the lack of labour force, which became the direct consequence of the crisis. The law about the family reunification was passed in France in 1976: millions of relatives of those already residing in France decided to leave their homes and move to France.

The national structure of immigrants is rather diverse: there are Vietnamese people, as well as Muslim and Christian Africans, etc. However, Arabs from Algeria, Morocco and Tunis made the largest colony: they only had to cross the Mediterranean Sea to reach France. It is hard to calculate the precise number of immigrants from the former French colonies, because the law prohibited nationality and religion-related questions during the population census. According to various estimates, there are up to ten million Arabs living in present-day France.

The growing amount of the non-white population has given rise to many problems. Immigrant communities took whole areas of Paris, Lyons, Marseilles and other large cities of the country. The quarters populated by immigrants were gradually turning into closed ghettos, where local traditions were replacing French laws: hijab kerchiefs, for example, that Muslim women wear on their heads have become the usual part of the French reality. The majority of newcomers can not find jobs and thus contribute to the increasing level of criminality. Hooliganism, racketeering, rapes and drug sales prosper in the French ghettos. Immigrants commit the largest number of crimes in France's largest cities, the police say.

Unlike Christian blacks, Arabs spend a lot of their time in mosques, whereas local authorities do not have any means to control what is going on there in the mosques. It is not ruled out that one may hear calls to Jihad and donations to organize terrorist acts all over the world, including France itself. The largest act of terrorism occurred in Paris in 1995, when a blast in the Parisian underground killed nine and injured dozens.

The reaction of the French society to ongoing aggression of the Arab population has won popularity to the far-right National Front with Jean Mari Le Pen at the head. His slogans about the need to deport millions of immigrants and deny the French entry to Muslims attract about ten percent of French voters. In 2002, for example, Le Pen managed to enter the second stage of the presidential election in France.

The French government started taking measures in connection with the continuing violence on the outskirts of Paris. Visa rules were introduced for citizens of Algeria, Morocco and Tunis, several mosques were closed and hundreds of Islamists were arrested. Another radical law appeared in France in the spring of the current year, when French law-makers prohibited Muslim women from wearing expressive religious symbols at schools, hijabs first and foremost. The new rule triggered massive actions of protest among Muslims not only in France, but in all Muslim countries. Many Islamic fundamentalists declared Jihad on France, but the French government has not changed its decision yet.