A teenager wanted to make his grandmother quit drinking vodka. So he poured out her bottle of vodka in the yard. The old lady was infuriated and made her grandson leave the house. The boy got into the house through the window and killed his grandmother with a steel bar. The boy's grandfather helped him bury the body near their house 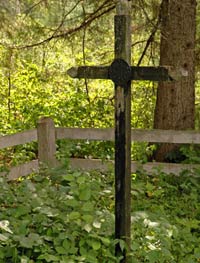 A teenager, 14, was arrested in the Dnepropetrovsk region of Ukraine on suspicion of aggravated killing of his grandmother. As it was reported, the boy came to the country to spend several weeks with his grandparents.

Neighbors said that the relations between the boy and his grandparents were very warm and affectionate. The only problem was that the old lady was addicted to alcohol, but her grandson criticized her severely for that.

One day, when the boy woke up, he saw his grandmother sitting at the table and drinking vodka.

“It was only 6 o’clock in the morning, and my grandmother was already drunk. It made me very angry”, explained the teenager.

The teenager came up to his grandmother, took the bottle away from her and poured it out in the yard. The old lady was really upset with such development of events: she closed the door and told her grandson not to return home.

However, the teenager was not going to give up. He got into the house through the window, grabbed a steel bar and started beating his grandmother, e-news reports. The woman died of severe injures.

Having killed his grandmother, the boy took a rod and went fishing. While the boy was fishing his grandfather woke up and found the dead body of his wife.

The man was frightened and ran to the pond looking for his grandson. The teenager told his grandfather the whole truth. They weighed their chances and decided to bury the old lady in the yard.

They told the neighbors that the old lady went to another town to see her relatives. However, the neighbors did not believe them and called the police.